Will Covid-19 Create An Alturistic Economy?

From Lizzo’s live-stream meditation sessions and Lil Nas X’s donations, to LVMH's hand sanitiser contributions and grassroots initiatives to help elderly LGBTQ+ people — a wave of kindness is rising in the midst of the global health crisis.

Yesterday, I caught a pamphlet getting posted through my letterbox. Under the title Community Care, it listed offers for food deliveries, coronavirus safety advice and a phone number to call if you’re in need. I opened my front door and ran after the person who had posted it; they had formed a neighbours’ coalition to help the lonely, vulnerable and elderly during the outbreak, asking for nothing in return.

If the Covid-19 pandemic has brought out one positive thing in us, it’s our altruistic side. As the virus has gradually spread, and with it nationwide quarantines in several countries, this has manifested in some beautiful and often-viral cultural moments of solidarity.

In China, where the breakout began, truck drivers risked infection to take food to the people stuck in Wuhan in February. Then there was the show of appreciation for Spanish, Portuguese, Italian and French doctors dealing with an influx of patients, which led to applause and cheers in the streets in all four countries over the past week. In Italy, you may have also seen neighbours singing to one another from their balconies to boost morale during isolation, an act replicated by musicians across the country. In Seville, Spain, a fitness instructor recently led locals under lockdown in an exercise class from their rooftop. And videos of doctors in Iran dancing to lift the spirits of their patients have been circulating online.

On a smaller, more local scale, solidarity in the face of a crisis is the texts from friends you haven’t spoken to in a while asking how you are, calls to elderly relatives to check up on their wellbeing, the sharing of hand sanitiser, the offer to walk someone’s dog for them, the “good news” WhatsApp groups people are creating. It is in the quotidian acts of care that we are displaying for one another and the initiative we are taking to connect with other people.

Take Opening Doors London — a UK charity supporting LGBTQ+ people over the age of 50 — that recently set up a telefriending service, matching volunteers with like-minded elderly LGBTQ+ people for regular phone conversations. Many are isolated, have no next of kin, have serious health conditions, or are afraid to come out as LGBTQ+ after moving into a retirement home. “This is an already vulnerable group, often forgotten by society. But with enforced social distancing, they are even more hidden,” says Meghan Herring, who coordinates the project. 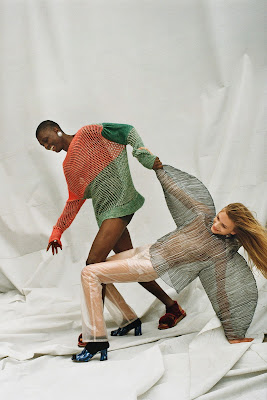 The charity has seen a surge in referrals and sign-ups recently due to people sharing information about the service online. Some of their clients who are unable to leave their homes are no longer being visited by carers and only have days’ worth of food in the house. “We had our first client die of coronavirus this week, which is heartbreaking. It’s an incredibly difficult time,” Herring says. “Now, more than ever, telefriending is a lifeline.”

Technology as a tool for good

Worldwide, social media is being harnessed to create a sense of solidarity and support as well as to educate and raise awareness. On Instagram, celebrities are helping us get through these difficult times: Charli XCX shared her quarantine diaries, Lizzo held a meditation live-stream in aid of mental health, and musicians such as Christine and The Queens have played virtual gigs to keep us entertained. Lil Nas X and Megan Thee Stallion are sending money to fans who are feeling the economic impact of the virus, while Cardi B says she will donate any proceeds from Coronavirus to charity. (The rapper’s Instagram post about the disease was remixed by DJ iMarkkeyz, which turned into an immediate hit.)

Meanwhile, on TikTok, teens are creating memes to help one another cope with anxiety and boredom. On Twitter, the hashtag #HighRiskCovid19 is being used by people living with disabilities or chronic illness, particularly the immunocompromised, to share their stories and encourage others to stay in and prevent the spread of the virus.

“I've seen several celebrities and political candidates use the hashtag to both amplify the campaign and to encourage others to learn about why social distancing is so important,” says Charis Hill, a disability campaigner in California who co-founded the hashtag. “A lot of people who aren't high-risk have said the tweets are making them cry because they are finally seeing how afraid we are. Others are coming out of the woodwork offering to help support our community by dropping off supplies to high-risk people.” Similarly, new sites such as HeroBuddy use geolocating to connect individuals at high risk of infection advised to stay at home with volunteers in their area who can help them with tasks such as food shopping.

Time might be the ultimate act of generosity, but for anyone on a steady income (as much as can be, given the current climate), there’s an opportunity to reevaluate how personal finances are spent. Beauty Banks is using crowdfunding platform GoFundMe to gather donations for soap to distribute to those living in hygiene poverty. People are also using crowdfunding sites, along with Venmo, PayPal and charities such as Turn2Us, to donate money to support freelancers, low-income individuals, and those who work in the gig economy.

When a health crisis on this scale occurs, the onus is on everyone at every level to respond. Many governments are providing funds for independent businesses in order to sustain them economically. Within the fashion industry alone, Donatella Versace, Giorgio Armani and Miuccia Prada have made generous donations to hospitals in Milan, and LVMH has started manufacturing sanitiser that it’s donating to the French health authorities. In New York, independent designer Kerby Jean Raymond of Pyer Moss announced an “imperfect solution” on Instagram — setting aside $50,000 (£42,000) to help minority and female-owned creative businesses in distress.

The world may be in lockdown and we are living in strange and worrying times, but as we stay indoors to prevent the spread of Covid-19, we can take comfort in knowing that we’re capable of random acts of kindness when they’re needed most. We might be in isolation, but hopefully, we’ll come out of this pandemic with a greater sense of togetherness and be reminded that the technology that so often consumes and alienates us can be used for positive change.

Posted by FASHIONmode News at 5:25 PM