Louis Vuitton Has Launched The Perfect Perfume For Globe-Trotters

Louis Vuitton has released a new perfume, Heures D'Absence, ideal for globe trotters In a transparent rectangular bottle, engraved with an airplane in mid flight, encased in a box shaped like a kilometer market, from the perfume Heures d'Absence launched in 1927 which took its name from the Vuitton family's second home, only this picture of the bottle remains, the formula having long since disappeared. An advert for Heures d'Absence featured in the French newspaper Gringoire in 1928. A presentation of the Louis Vuitton perfume accompanied by other essentials from the house including a classic handbag and perfume holder. 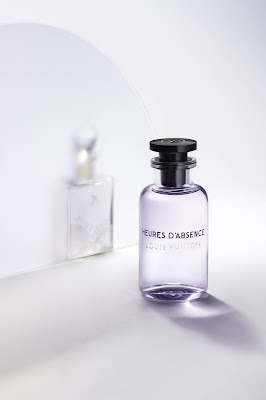 Based on the history of the House's very first perfume, Jacques Cavallier Belletrud envisaged this fragrance like a breath of nature, centered around a trio of flowers from Grasse, France. First to the nose is jasmine and rose, both opulent and very pure because of the way they are extracted with Louis Vuitton being the only house to use CO2 extraction to obtain the scents. Then, very quickly the green facets of mimosa break through, followed by sparkling notes of raspberry and a round touch of musk brings it all together. The end result is a contrast between the vintage charm of classic powdery scents and a very modern intensity as with all the unique Louis Vuitton fragrances.

Posted by FASHIONmode News at 12:49 PM