And then, there was the handbag – the Kaia bag, to be precise – draped over Gerber’s torso and held in prime position on her right hip. The 18 year old premiered the mini satchel the house named after her, thus cementing her super status with one metal YSL clasp and an adjustable shoulder strap.

Fast forward to the autumn/winter 2020 show season, and Gerber naturally put the newly launched Kaia bag front and centre for every street-style photo op. The model stayed true to her original golden brown leather mini model, but a slightly roomier “small” version is also available in a vintage-look black leather, plus four python skins. The price for these petite sacs? Upwards of £1,050.

Gerber’s namesake bag puts her in good company: some of the most famous handbags in history are named after the muses who inspired them, or who coveted them. Hermès’s Sac à dépêches was renamed the Kelly in 1970, in homage to Grace Kelly’s penchant for the bag’s ladylike charm. (She is said to have fallen for the top handle style when filming To Catch A Thief, thanks to costume designer Edith Head’s impeccable wardrobe choices for her character, Frances Stevens.) The Hermès Birkin succeeded it, and was created in Jane Birkin’s honour, after a much-publicised chance encounter with the brand’s chief executive, Jean-Louis Dumas, on a plane. 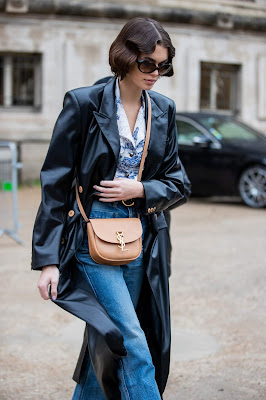 Gucci renamed its Bouvier bag the Jackie after the former First Lady (a note for Gucci fans: the brand is reintroducing it for autumn/winter 2020); Sophia Loren inspired Salvatore Ferragamo’s Sofia bag; Gisele Bündchen was gifted the Luella Bartley Gisele bag; and Tod’s renamed Diana, Princess of Wales’s favourite accessory the D-Bag upon her death.

Mulberry, meanwhile, has a coterie of bag ambassadors. The capacious satchel-style Alexa (Chung) was born in 2009, a Cara tote followed in 2015 as a leather-ised salute to Cara Delevingne, the Del Rey was christened such in 2015 after Lana Del Rey; and the British brand is currently feting the launch of the Iris, inspired by Iris Law.

The Saint Laurent Kaia bag has already amassed a cult following of Scandi street-stylers, including Pernille Teisbaek and Jeanette Madsen. Lucy Boynton – whose boyfriend, Rami Malek, has appeared in campaigns for the brand – has also been carrying the tan mini Kaia in New York. It’s surely only a matter of time before the Hadids sling one over their shoulders in support of their friend. Or will it be Crawford who takes it for a spin, for another full-circle moment?

Posted by FASHIONmode News at 11:18 AM