“Strength and fragility” comprised Sarah Burton’s quick-fire summation of her autumn/winter 2020 collection, backstage after the Alexander McQueen show. But the designer also had camaraderie on her mind, which, when coupled with the growing fears around the spread of coronavirus adding unease to the closing days of the season, felt particularly apt. “I felt like we all need to be heroic and strong for all the people we work with, our friends, our family,” she said. “It’s a love letter to all of us. So, I wanted it to be quite stripped back, but actually it’s quite bold and powerful. I think we want to be empowered at this time.”

With that in mind, she gave the fashion pack a history lesson in Welsh folklore, soothed their tired minds with readings from the works of Dylan Thomas performed over an insistent beat, and conjured up a punchy casting that included Nineties heroine Kirsty Hume, girl-of-the-moment Paloma Elsesser alongside British Vogue favourites Kaia Gerber, Fran Summers and Adut Akech. Here’s five things to know about the Alexander McQueen autumn/winter 2020 show.

The collection was infused with Welsh culture 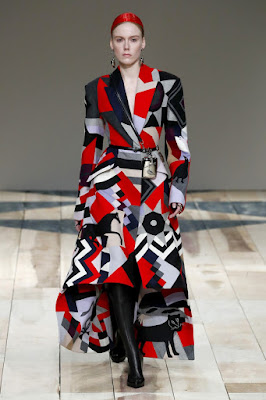 A research trip to Wales got the creative juices flowing. Burton’s moodboard was littered with samples of traditional quilts and fabrics alongside images of red painted farmhouses, Welsh men and women wrapped up in blankets and shawls, as well as – calling all medieval literature students! – the stylised front of the Lady Charlotte Guest translation of The Mabinogion, a collection of 12th and 13th-century stories originally compiled in Middle Welsh from earlier oral traditions. One quilt in particular, an allegorical design which Burton and her team had pored over during their trip to St Fagans National Museum of History, in Cardiff, inspired a patchwork coat on the autumn catwalk. Comprising over 4,500 individual patches, the original quilt was created by master tailor James Williams over a period of more than 10 years: “It has the industrial revolution in there, viaducts and travel and sailing and biblical pictures. There was something beautiful about the whole kind of narrative in the clothes that you wear,” said Burton. The resulting coat boasted motifs of animals and a Welsh leek.

The notion of protection was an important theme 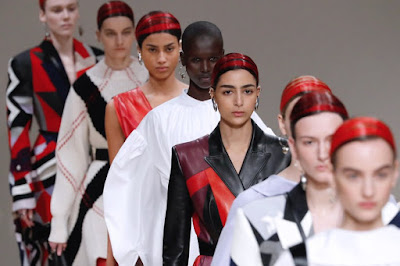 The theme of protection came up again and again as Burton and her team immersed themselves in Welsh tradition. Old photographs of Welsh men and women holding their babies swaddled in shawls had inspired double-faced cashmere blanket coats and dresses, while red was the persistent colour, doused on models’ hair, and running through leather, checks and lacework. “Red became symbolic in the collection,” said Burton. “I loved the beautiful red houses, painted to ward off evil, so it’s this idea of healing and protection.” 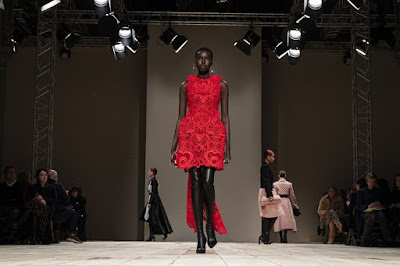 Much of the moodboard was given over to a series of delicate wooden spoons, known as love spoons. The hand-carved symbols of affection were so striking to Burton that she used them as the basis of embroideries. “It’s almost like a love letter, so we made these jacquards and degrade fabrics and this love spoon guipure lace,” she said, gesturing at a spoon that she had drawn around to make it into a homespun, folk-infused pattern which then comprised ruby red dresses. 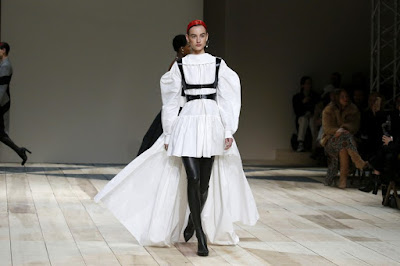 Homespun craft dominated the McQueen narrative, but then along came the accessories: most looks were paired with chunky, crepe-soled ankle boots or thigh-high, stretch-leather numbers, which lent a tough, subversive edge to decorative embroideries, traditional flannels (woven in the UK by Savile Clifford and John Foster) and duchesse satin. The jewellery, too, conveyed tough love: high-shine metal chokers and punky ear hooks jostled for attention with metal charms that resembled hip flasks as well as hand-carved bird whistles.

The final fantasy dresses redefined the notion of a fairytale gown 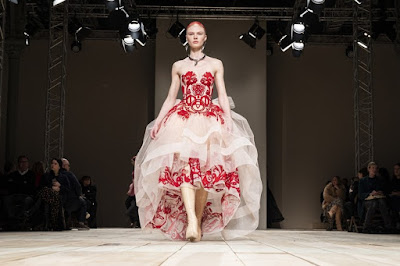 As is customary with a McQueen show, the fantasy gowns were saved until the end. Tulle dresses came with embroidery in sequins, cording and quilting depicting Welsh folklore, including otters, acorns, butterflies, starlings, crows and – you guessed it – a Welsh lamb. Consider this the ultimate Easter dress.

Posted by FASHIONmode News at 9:15 AM