Hedi Slimane’s continued research into Celine’s heritage has brought with it a surprise jewel for autumn/winter 2020: the reintroduction of the Sulky logo. Dating back to 1966, the Sulky – a horse-drawn vehicle used in harness racing – originally featured on bags, shoes and belts in an accessories line that paid tribute to Richard Vipiana, the husband of Celine founder, Céline Vipiana.Camarat insignia. 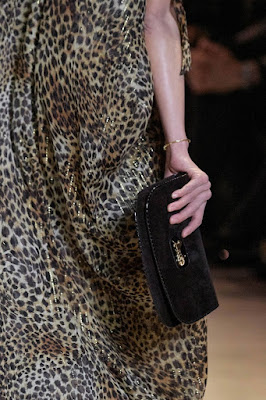 Next season, the equestrian motif – which Phoebe Philo also explored during her tenure – will be punctuating Celine’s ladylike clutches and shoulder bags, much like the house’s signature Triomphe, Crécy and Camarat insignia. Here, one of the Sulky logo bag styles and the other new Celine handbag shapes – including large exotic clutches, boxy shoulder bags, embossed satchels and evening numbers with chain straps – to carry as your trusty steed next season.

Posted by FASHIONmode News at 12:59 PM