In 2020, fashion is truly global, and so was this year’s International Woolmark Prize. With the theme of traceability, it also ushered in some serious technological innovation, too. From Karl Lagerfeld and Yves Saint Laurent to Giorgio Armani, Donna Karan and Ralph Lauren, Woolmark has awarded and incubated some of the most prolific, era-defining designers in fashion history. This year, chosen from 10 of the most promising and diverse global talents to date, the winners of the International Woolmark Prize and the Karl Lagerfeld Award for Innovation are, respectively, Richard Malone and Emily Adams Bode for their designs rendered in Australian Merino wool and presented during Fashion Week in London during the autumn/winter 2020 show season.

The finalists, selected from more than 300 entries, from 47 countries, hailed from the United Kingdom, China, Ireland, America, Germany, South Korea, Belgium and France. For the 2020 prize, The Woolmark Company combined the womenswear and menswear categories and did away with regional semi-finals, instead opting for an open call to the global industry – both firsts for the organisation and a sign of the wider cultural shift towards inclusivity and gender fluidity, support the border-defying nature of fashion.

One of the most notable things about this year’s Woolmark Prize – a prize centred around the use of wool; an ancient material that happens to be natural, renewable, biodegradable and durable – is the integration of the blockchain-powered tech platform Provenance which can be used to track every step of the supply chain. Each garment available to consumers will be embedded with a microchip to showcase the journey from “farm to factory.”

“Provenance has enabled the Woolmark Prize contestants to make the supply chain and impact behind their collections transparent to the judges, retail buyers and conscious shoppers,” Provenance founder and CEO Jessi Baker told Vogue. “From proof of responsible sourcing to the governance behind the business, each garment comes with a story accessible from unique labels embedded with digital tags,” she explained. In addition to blockchain, the tech utilises mobile and smart tagging to make information clearly available.

Emphasizing The Woolmark Company’s commitment to leading fashion into the future, it’s fitting that this year the finalists were not merely brilliant designers (a huge achievement in itself), they are also actively building brands focused on values such as innovation, diversity, inclusivity and sustainability. These ideals lie at the core of The Woolmark Company (a not-for-profit that works alongside more than 60,000 wool growers in Australia to research, develop and certify Australian Merino wool), which, via its prizes and collaborations, also supports brands and trade partners – helping them to work responsibly in all areas of operation (from fibre-sourcing to garment-making) and, through its established retail network, connecting them to the world’s new markets and most prestigious boutiques and retailers. "What I'm loving this year is the use of wool mixed with sustainability,” explained British Vogue’s editor-in-chief Edward Enninful who sat on the judging panel with other industry heavyweights such as Kim Jones, Takashi Murakami, Sinéad Burke, Shaway Yeh and Tim Blanks. "The Woolmark Prize for me is a sign of excellence; it puts designers on an international level.”

Winner Richard Malone, the Irish national living and working in London who took home the more than £100,000 grand prize, is vigilantly dedicated to sustainable, ethical practices in every area of his business and strongly against mass production. As a small brand with limited output, Malone operates under the belief that the creation of any piece of clothing must be justified and is dedicated to tracking each component of all he produces. His clothing is rendered in organic and recycled materials using natural dyes, often employing couture techniques. It is slow fashion at its best.

As his business grows, revolutionary traceability technologies such as Provenance will help Malone’s business to scale responsibly and the support from the Woolmark network will go a long way for him to further carry out his mission. “It means we can continue working with supply chain and share our learning with other brands and designers,” he said. “It also opens up the dialogue of fashion so more people can be part of it.” There are many brands that claim sustainability, but with platforms such as Provenance impact can be traced in detail with a lot less guesswork. 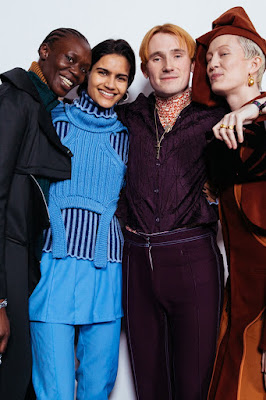 For a designer like Malone, Woolmark and their influential network’s support has the power to amplify and expedite some long overdue changes in the fashion industry and makes a powerful statement about challenging the status quo as a young person and succeeding in the industry in the process. “The Woolmark Prize was approval that you can rework the fashion system and survive outside of it,” Malone said. “A few years ago, my ideas of sustainability were completely radical - now look at the conversation. With a commitment to the work and people who make the clothes, we’re finding solutions to undo some of the damage which is constantly perpetuated by the fashion industry.”

Malone encourages all designers to focus on innovation and preserving the future through responsible practices. In September 2019, he announced that his future collections would be numbered instead of tied to the regular fashion calendar. The shift allows him to produce clothing only when it makes sense to do so rather than simply for the sake of putting out a new collection several times a year during fixed show seasons. It is a departure from a fast-paced cycle that has historically led to a great deal of waste.

When speaking to Vogue on his advice to others who strive to get involved, Malone explained “I hope it’s encouraging to other designers to commit and to be transparent, and to look past the greenwashing that’s out there. Things have the potential to change and we should be aiming to improve people’s lives and the health of our planet through our work, not damaging it and its people in the archaic ways of the past.”

Also paving the way for the future are designers such as Emily Adams Bode, the winner of the Karl Lagerfeld Award for Innovation, who was awarded just over £50,000 for her outstanding achievement in innovation and creativity with the development and use of Australian Merino wool. In her mission to move fashion forward, Bode is looking back – not backwards, but back – to integrate historic techniques and leftover materials that would otherwise be forgotten. With one-of-a-kind designs crafted in antique and sustainable fabrics she is on a mission to preserve historical techniques in textile production, working with sustainable female-run factories in Peru and India.

Female-centric traditions like quilting, applique and embroidery are applied to modern workwear silhouettes. Garments are rendered in upcycled materials, and in “forgotten textiles” such as tablecloths, quilts and bed linens. “As a young brand whose focus is on the preservation of historical techniques and textiles, it is an honour to be recognised by a company that similarly has strived to preserve the use and awareness of a historic fibre,” Bode said of The Woolmark Company. Her advice to other designers on what it takes to succeed? “Stay true to your narrative, the story you want to tell. It’s important to not get entirely burdened by the small things, the day-to-day stressors of running a brand. Make it a priority to focus on the bigger picture and your goals.”

Through Woolmark’s network of retail partners, not only the winners, but all of the 2020 finalists will be presented with commercial opportunities and will remain connected to Woolmark’s innovative community. Commercialised items from the collections will be available for purchase from September 2020.