Eight emerging designers metaphorically threw their mortarboards in the air on 10 March when they graduated to the finals of the 2020 LVMH Prize. Now in its seventh iteration, the prize — open to designers under the age of 40 — has helped cultivate the careers of previous winners including Marine Serre (2017), Grace Wales Bonner (2016) and Marques’Almeida (2015). It has also given exposure to finalists such as Ambush co-founder Yoon Ahn (2017) — tapped by Kim Jones as Dior Homme jewellery designer in 2018 — and the current men’s artistic director of Louis Vuitton, Virgil Abloh (2015).


The seventh edition of the LVMH Prize — what’s new?

This year sees Abloh, as well as Robyn Rihanna Fenty and Stella McCartney, join the jury alongside previously standing members Clare Waight Keller, Jonathan Anderson and Maria Grazia Chiuri among others. Together they will select a winner on 5 June. Rihanna launched her Fenty fashion label in May 2019 as a joint venture with LVMH, while McCartney sold a minority stake in her brand to LVMH chairman and chief executive officer Bernard Arnault in July that same year.

So, aside from the even starrier jury line-up and attracting a record 1,700 applicants, what’s set this edition of the prize apart so far? “One of the key highlights is that all the designers integrate sustainability in their work,” replies executive vice president of Louis Vuitton and LVMH prize founder Delphine Arnault. “How they produce, with what materials; a lot of them are using deadstock, which means that each piece is unique.”

Sustainability is integrated into the finalists’ work in a variety of ways. Take British designer Priya Ahluwalia, whose work explores her Indian-Nigerian heritage while giving vintage and deadstock textiles a new lease of life. Or Emma Chopova and Laura Lowena of Chopova Lowena, known for fusing recycled folkloric fabrics with sportswear references. “There were a lot of duos working together [in the semi finals],” observes Arnault. “I find this really exciting because when you start your brand, you don’t have huge teams, so having [a partner enables you] to interact and test ideas.”

Sindiso Khumalo is flying the South African flag this year after 2019’s winner, Johannesburg-based Thebe Magugu — the first African recipient of the LVMH Prize in the competition’s history — made his debut on the Paris Fashion Week schedule for autumn/winter 2020. Khumalo’s printed organic-cotton dresses pay homage to the extraordinary life of Sara Forbes Bonetta. An orphan child of Yoruba royalty in West Africa, in the 19th century, she escaped enslavement and went on to become Queen Victoria’s goddaughter, marrying wealthy Yoruba businessman Captain James Pinson Labulo Davies. 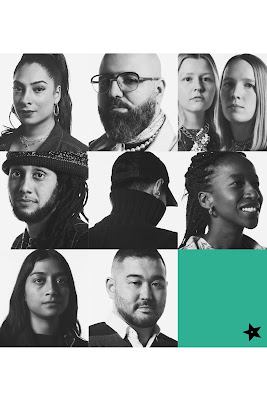 In order to be eligible for the prize, designers must have made at least two collections, and this year’s finalists come with a wealth of industry experience. Before launching Casablanca in 2018, French-Moroccan designer Charaf Tajer co-founded the French brand Pigalle and ran Parisian club Le Pompon, where Abloh reportedly played his first DJ set.

For two seasons in a row (autumn/winter 2019 and spring/summer 2020), Tomo Koizumi has been the toast of New York Fashion Week. His bountiful Crayola-coloured creations are styled by Katie Grand and presented at Marc Jacobs’ Manhattan store, filling the social media feeds of industry folk. London-based designers Supriya Lele and Nicholas Daley — on their sixth and eleventh collections respectively — are stocked internationally at retailers such as Browns, Dover Street Market and Ssense, and have both received support from the British Fashion Council’s NewGen initiative. The enigmatic New York-based designer Peter Do meanwhile, worked under Phoebe Philo at Céline for two years, and has since amassed a near-200,000-strong Instagram following.

How to survive in an increasingly competitive luxury market

But a cash injection and expansion can create growing pains, as experienced by 2014 winners Thomas Tait and Hood By Air — both have since ceased producing collections. “The main challenges are in terms of cash flow — they have to pay all the fabrics and the manufacturers before they receive any payment from the wholesalers,” Arnault says of the commonalities in emerging designers’ struggles. “It’s also difficult for designers to get their brand known, because there’s a lot of competition. Now with social media, I wouldn’t say it’s easier, but it’s a good way to make yourself known quite rapidly. Designers are so much more digitally savvy now [than when the prize started seven years ago]. We get used to things changing really, really fast. And we’re in an industry where things have to change all the time.

“You always need to satisfy your customers. You need to have the right product, but also deliver on time so the wholesalers have enough time to sell the merchandise,” Arnault continues. “Also, if you deliver too late, you have less time on the shop floor and then your sales are not so good. It’s important to take time to grow a business organically, rather than rush into big quantities that you won’t be able to deliver.”

While the value of financial reward cannot be denied, the year of mentorship that both winners will receive from dedicated LVMH designers is the ultimate investment, Arnault believes. “[They’ll get] all the advice that they need in terms of where they should produce and what retail price to position their products; to make sure they have no intellectual property problems or accounting and production issues.” She adds, “But even if they don’t win, just being here and being able to meet all these professionals, all these experts, from buyers to editors, stylists, photographers and models, means they get a lot of exposure.”

Posted by FASHIONmode News at 7:27 PM