Distilling The Fashion Industry’s Water Consumption, And How To Reduce Your Own H2O

It takes 2,720 litres of water to make just one cotton T-shirt — as much as a single person would drink over three years. To reduce your H2O footprint when buying clothes, and to mark World Water Day on 22 March, here are six ways you can do your part to lessen the fashion industry’s water consumption.

Fashion is undoubtedly a thirsty industry. According to the Ellen MacArthur Foundation, textile production uses around 93 billion cubic metres of water annually — the equivalent to 37 million Olympic swimming pools.

Water consumption on that level is felt in dry regions especially. “First and foremost, the impact is felt by those communities where production is occurring,” Alexis Morgan, WWF’s global water stewardship lead, tells Vogue. “[There are] issues around access to water and sanitation.” 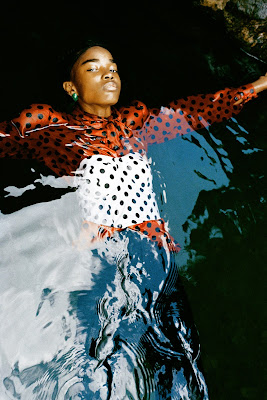 But it’s not just water consumption that’s an issue when manufacturing clothes: pollution of waterways is also a major concern. In fact, an estimated 20 per cent of global wastewater is caused by dyeing and finishing processes in the fashion industry, according to a 2012 report. “It prevents people using those waterways,” Morgan explains. “Certain chemicals used in the dyeing processes can be problematic. Use of nitrogen [for example, in textiles printing] and pesticides can affect local drinking water.”

To mark World Water Day on 22 March, Vogue looks at six ways you can be more conscious about your H2O footprint when you shop for clothes.
A large wheeled sprinkler system provides irrigation water from the Pecos River to a field of cotton near Clovis, New Mexico.

Conventional cotton requires a huge amount of water to grow. In fact, one cotton T-shirt can require as much as 2,720 litres of water to produce, according to an Institute of Water report. However, organic cotton uses 91 per cent less ‘blue’ water (from groundwater and surface-water bodies, such as freshwater lakes and rivers) than conventional cotton, according to a 2017 Textile Exchange study — making it a much more water-efficient choice. “If you’re growing cotton organically in the right places, it can actually use relatively little water and have a relatively low footprint [when it comes to water pollution],” Morgan says.

Depending on how they are made, jeans can consume large volumes of water; a typical pair can use up to 10,850 litres to manufacture. That’s why brands such as Outland Denim, whose fans include the Duchess of Sussex, are offering low-water options. “One of the most water-intensive areas is in the washing and finishing of a jean,” says Outland founder and CEO James Bartle. The company uses innovative technology, including laser equipment, to cut down on the amount of water needed for washing and bleaching by up to 65 per cent.

Polyester is a double no-no

By now, most of us know that polyester is a huge issue when it comes to water pollution, as it sheds millions of plastic microfibres when washed. The tiny pieces of plastic end up in our drinking water, as well as posing a severe threat to marine life, which mistake it for food.

Polyester can also contribute significantly to water pollution when it is manufactured, with harmful chemicals such as cobalt, sodium bromide and antimony oxide entering waterways if not managed properly. “The different chemical processes required to manage and convert the polyester can have significant pollution impacts,” Morgan explains.

Find out where materials are sourced

Doing your research is important because you need to know where the textiles are made to establish how much of an impact its water-use is having. Natural fibres such as silk and cellulose consume a lot of water, but may be produced in a wet region, for example. “The more you can learn about how and where materials are sourced, the more informed you can be on how sustainable they are and any potential trade-offs,” says Julie Brown, director of the Higg Index at the Sustainable Apparel Coalition. “If a company has visibility into its supply chain, that's a good sign that it cares.”

Be conscious about leather

The processing and finishing of leather also has a high H2O impact; a pair of bovine leather shoes is estimated to use up to 8,000 litres to manufacture. And the chemicals used in tanneries are also a concern when it comes to water pollution. “The processing of leather typically requires pretty damaging chemicals; chromium six [a hazardous form of chromium] is often used,” Morgan says. Look for brands who are members of the Leather Working Group, which is working with suppliers to reduce water and chemical usage.

One easy way to save water is simply by washing your clothes less. “Washing clothes consumes a lot of water and makes a big environmental impact, so think twice before washing something that has only been gently worn and isn’t really dirty,” Brown says, adding that how you wash them is also a factor. “Wash full loads of clothes, not just a few items, and use a lower water sector if you have it.”

Posted by FASHIONmode News at 8:33 AM