For Demna Gvasalia’s first Balenciaga show since the house announced that it would be returning to the haute couture schedule after 52 years, the industry was poised to see how the artistic director’s ready-to-wear would be influenced by his access to the couture archive and revitalised atelier. Instead, Gvasalia quite literally threw a curveball into the arena, and explored society’s sometimes fanatical obsession around team sport, chiefly football. Between the neo-gothic looks in Gvasalia’s default executive realness mode, he premiered protective motocross suits and the uniform of the fictional Balenciaga Football Club.

The explanation behind Gvasalia’s decision to kick it for autumn/winter 2020? “Footballers and priests were what I grew up with in Georgia,” he told British Vogue, shedding light on the black looks inspired by clerical garb. “Sport, religion, obsession, and seduction are stripped of their functions,” continued the show notes, “leaving only the sensation of a fashion object.” 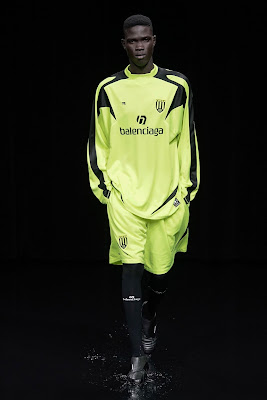 Members of the press – plus Kim and Kanye, who hotfooted it across town after West’s Sunday Service – saw a glimpse of the kit in looks 66 and 70, as models splashed down the water-filled runway wearing trousers that were a third mesh sports short and two thirds tracksuit. Look 90 was when the Balenciaga players started approaching from the sidelines in earnest. Four full kits, including socks and boots, in red, navy, black and fluorescent yellow were printed with various Balenciaga logos and insignia. Some models carried the new Lunchbox clutch (essential for half-time snacks), while others kept their hands in their pockets.

The co-ed collection of business-meets-pleasure clothing might have given few obvious clues about what’s to come at the couture autumn/winter 2020 shows in July, but, as always, there were major talking points in Gvasalia’s Balenciaga vision. Last season, the hype master’s sculpture-like ballgowns went viral. This season, pundits are calling extra time to talk about which colour kits to wear next season.

Posted by FASHIONmode News at 12:57 PM