Mens Velvet Clothing.
Men's velvet is by no means a new trend; it has been a fabric of choice for the most fashion forward gents for some time now. And yet so many still opt for the wool suit, or sports coat, over the velvet one. To their detriment. Wool, no matter the thread count, remains the safe option. Velvet is the sexualised one.
So here's the challenge for  Autumn / Winter 2010: don the velvet. Invest in it. Wear it with confidence. Stand out. 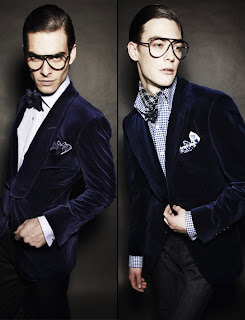 Velvet Suits and Sports Jackets.
If it's standing out and dressing to impress that you want to do, then velvet is your fabric of choice for 2010 / 2011. And it has to be velvet of some proportion. While the velvet bow tie (featured below) is on trend, the coming seasons are about making velvet one of your key statement pieces.
But don't for a minute interpret 'velvet of some proportion' to mean that you can get away with wearing anything made of velvet. Don velvet socks and I'll be the first in line to tell you to take them off, and those standing behind me waiting to do the same thing are likely to be the very people you're looking to attract or impress. Instead look to invest in two key takes on the trend: a velvet sports jacket / velvet sportcoat and, for those with the confidence to pull it off, a velvet suit. 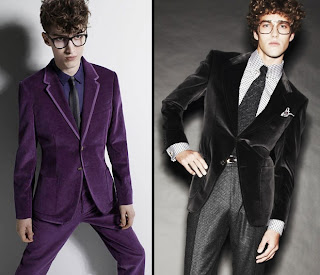 How you interpret these two statement pieces depends on your attitude to life. For those with a penchant for the young-classics or school boy attitude there are those velvet looks below, while those who lean towards confidence of a more masculine or sexual kind will find the top looks, both from Tom Ford, more to their liking.
As for the colour, you'll notice that so far I've only featured a sole black velvet jacket, think dark shades. It's likely to be in the Autumn / Winter evenings that you wear velvet and dark hues will always sit best. But don't feel that dark has to equal black. From navy to plum, the right colours will ooze confidence.
A Subtle Interpretation.
If full velvet suits and jackets aren't for you then, fear not, there is a alternative: velvet lapels. Though an understated take on the suit and jacket element of the velvet trend, they can be as equally as eye catching as the full velvet look. Provided, of course, that they're worn with the right lapel.
And that part is simple: avoid a velvet lapel that is cut into a shawl or notched lapels (unless it's piped, as the Paul Smith piece above is) and invest in a jacket that sports peaked velvet lapels. You're looking for a dominant, eye catching peak, moreover, a peak that is firmly cut and finished. One that says alpha-male. 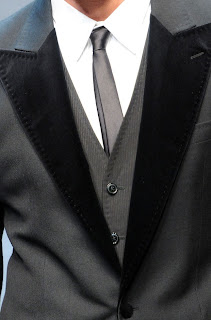 Men's Velvet Overcoat.
If you're after velvet outerwear, such as a men's velvet overcoat, then you're in luck: the cooler months of 2010 / 2011 are definitely suited to the style. A word of caution, however; an overcoat made entirely of velvet, particularly one with a a high sheen, won't be easy for most to pull off. It's better to be subtle and confident, than standout and be shy. So if you do wish to invest in a velvet overcoat and think confidence might be an issue, aim for something with a low sheen and in a dark hue, preferably black.
If you're after something that plays it safe but still creates a point of differentiation, then consider using velvet as a fabric that adds flair to a wool or cashmere overcoat. An obvious, though eternally refined, detail will be a velvet collar. The Burberry overcoat marries this detail with a Regency-cum-military cut. 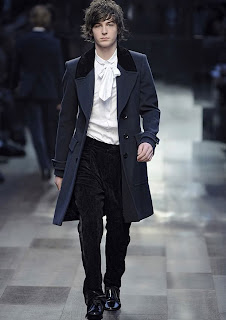 The Cut Of Velvet.
Whilst velvet pieces can be liberally spread throughout a chap's wardrobe in 2010 / 2011, the appropriate cuts aren't as wide ranging. Pick a cut too lose or a lapel too soft and you'll end up looking like you've borrowed your father's vintage velvet; yes, your father may have been cool, but it's your job to be cooler. There's a bigger risk of course: velvet in 2010 / 2011 is, in part, about sexual confidence. Thus you're looking for your velvet to convey more trim masculinity and less foppish dandyism.
Most of the tailoring cuts are suited to men's velvet, though I'd personally recommend avoiding the neo-double breasted cut. I'd also be wary of a three piece velvet suit; velvet is not a thin fabric, and the dual layers of a velvet waistcoat and a velvet jacket may add too much bulk to even the most worked of figures. The velvet suit, below, from Dolce & Gabbana illustrates the point, with the trousers particularly highlighting why your velvet needs to be a trim, masculine cut. 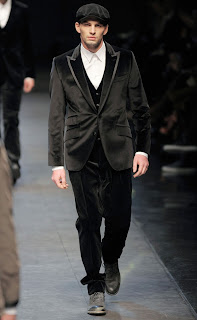 If you'd rather a velvet overcoat then many of the fashionable suit cuts will still apply, though my preference would lean towards a double breasted overcoat as a means of conveying a trimmer silhouette. I'd also lean towards a velvet coat that is cut well above the knee, preferably around the mid-thigh level.
Posted by FASHIONmode News at 5:38 PM No comments: 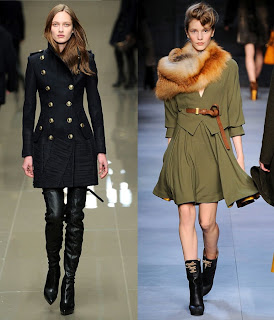 Functional military clothing in 2010.
Perhaps understatement is the wrong word for the military trend for Autumn / Winter 2010. After all, there are obvious military connotations - they're just not as obvious as in past years.
Key Elements.
Women's military fashion runs parallel to the new mens military fashion trend in that there are several key motifs:
How to wear it in 2010.
For the military fashion trend pick from the two key looks: army and aviator.While the army interpretation is all about army greens it can still be broadly interpreted and we've seen it styled successfully with everything from cropped shearling collared coats to loose fitting cargo pants.
A word of warning though: we have the odd occurrence of camouflage print, we'd recommend you avoid it for the time being - it's simply too soon for  a come back. 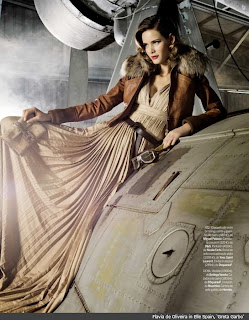 Posted by FASHIONmode News at 4:58 PM No comments:

Kate Moss will make a personal appearance at the Topshop Oxford Circus flagship store next Monday evening (November 1st) to launch her new 1970's Bohemian autumn 2010 collection.'Mossie' is expected to play 'shopgirl' as she hosts the event, talks customers through the new range and unveils her first vintage jewellery collection using semi-precious stones.

The clothes perfectly capture Kate's personal take on the vintage-boho look and include several of the iconic pieces which have featured in the 14 T collections she has produced since the launch of Kate Moss Topshop in May 2007, such as a short-sleeved, floral-print mini tea-dress, and a one-shoulder LBD. 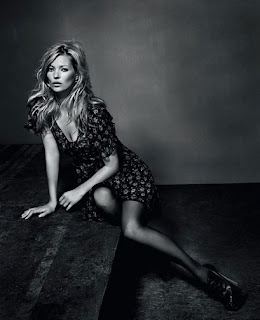 The mood of the entire collection is very Biba-esque, with delicate chiffon and cotton decorated with daisy and star-prints, romantic bell-sleeves, moody florals and paisley, fringing, and cross-stitch and folksy embroidery details.

A Stevie Nicks-style cream and terracotta, patchwork chiffon maxi-skirt, with a sheepskin and grey suede shrunken bomber-jacket creates one of Kate's key looks, while a dramatic, black playsuit, with long-sleeves edged in fringing, demonstrates her love of dressing-up. Other must-haves include a grey, shaggy, hooded cardigan; a high-collared, gothic-green, feather bolero; midnight-blue velvet hotpants with a cream lace trim; floaty, chiffon 'pirate' blouses; a cream lace smock-dress with a velvet Peter Pan collar; and a plain cream crepe tunic with faux fur collar.

The collection also includes a revival of the hot-selling, backless, sequinned maxi, known as the 'Perfume Dress', which was inspired by the shape of a retro perfume bottle, and which is reprised for this season in gunmetal; lace and chiffon underwear, statement cocktail rings and star and heart gold necklaces.

The event will be something of a 'Goodbye Hello' for Kate Moss, as it marks her last conventional 'seasonal' collection for Topshop, but marks the beginning of a new special projects-based fashion relationship.

"It could be some special pieces in cashmere, for example, or some amazing vintage treasures Kate has uncovered. Basically, it will be whatever takes her fancy," said a spokesperson. "We want Kate's collections to be always surprising, like her - not formulaic and tied to seasons, like a machine
Posted by FASHIONmode News at 4:23 PM No comments: