Diane Von Fürstenberg has sold 15 million wrap dresses and raised $100 million (£80 million) for the Statue of Liberty Museum. It was in recognition of both of those achievements, as well as for her support of female leadership, that this week France made her a Chevalier de la Legion D’Honneur in Paris.

The address for the occasion was the Ministry of Europe and Foreign Affairs, a mid-19th century building on the quai d’Orsay where the Treaty of Versailles was signed in 1919. A cohort of Von Fürstenberg’s family (her son Alex, and her grandchildren Talita and Taliso), friends (Jeff Bezos, Larry Gagosian, Natalia Vodianova, and Vogue’s Anna Wintour), and fellow designers (Christian Louboutin, Gabriela Hearst, and Julie de Libran) were among those who joined her in the Ministry’s grand Napoleon III rooms.

Christine Lagarde, the President of the European Central Bank, and the former President of the International Monetary Fund, presented Von Fürstenberg with the prestigious honour. Lagarde had many words of praise, likening her first to the female designers Coco Chanel, Madeleine Vionnet, and Sonia Rykiel, who likewise channelled the zeitgeist of their times. “Your wrap dress beautifies women’s bodies without either restricting them or burdening them with too much sophistication,” Lagarde said. “The woman clothed by Diane Von Fürstenberg is free in her movement and free to take life in her own hands.” 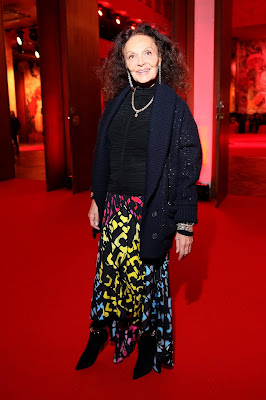 Lagarde then turned to Von Fürstenberg’s philanthropy and her recognition of women of strength, courage, and leadership. The Diller-Von Fürstenberg Family Foundation, which Von Fürstenberg founded with her husband Barry Diller, has recognised Anita Hill and Jane Goodall, among many others. “A dress can only be truly beautiful if it’s worn with dignity and with elegance, and your support of women’s struggles for independence reflects a generosity that infuses the most perfect and subtle elegance: the elegance of the heart.”

When the Legion’s five-point cross and red ribbon was affixed to Von Fürstenberg’s sparkling velvet dress, she delivered a moving speech of her own. “I want to salute what the Statue of Liberty represents: freedom and hope. We need to remember it was originally named Liberty Enlightening the World, and god knows we need it.” She went on: “I am accepting this Legion D’Honneur with pride and humility, knowing that recognition and honour give us a voice. And when we have a voice it is our duty and privilege to use that voice for those who have no voice. My heart is filled with gratitude. Merci and vive Paris!”

Guests shared their love. Vodianova called Von Fürstenberg “my godmother and a great support in many ways throughout my life. She always has the best advice.” Erik Torstennson, co-founder of Frame, seconded that. “She’s helped me – she’s like my business coach. She speaks the truth and is so on point. She’s like the chicest shrink in town.” De Libran kept it simple: “she’s an inspiration.”

Posted by FASHIONmode News at 12:47 PM