What’s better than having one address? Having two, according to Jonathan Anderson. His new JW Anderson store straddles the corner of Brewer Street and Wardour Street in London’s Soho, and it looks right at home amongst the grit and grind of the district thanks to neon signage and industrial-style window-dressing.

For some, 12 March might seem an inauspicious date to be opening a store. As the number of cases of coronavirus rises rapidly in the capital, rumours are proliferating that the city might soon come to a standstill, with residents encouraged to quarantine themselves. Anderson, never one to go with the grain, is nevertheless resolute in his optimism. “Ultimately, the world will continue, there will be a rebound at some point,” he said, speaking over the phone the day before the store was set to open. “All businesses have contingencies. It is going to be difficult but ultimately – and we are talking about Britain right now – we have gone through worse things. The pessimism and spread of disinformation is going to be the problem here. It is about being pragmatic, helping one another, and trying to be realistic.”


It doesn’t get more realistic, indeed, than Soho. The district had been in Anderson’s mind for years as a possible location for the first JW Anderson store since he first opened a Sunspel outpost here during his stint as creative director of the luxury staples label some nine years ago. “I’ve always loved Soho, it’s an amazingly romantic part of London,” the 34-year-old designer reflects. (He once lived on Charlotte Street.) “Soho is the most diverse, multicultural part of London, a melting pot of history, diversity, gender. All of that reflects the essence of JW Anderson: it’s a very open brand, a British brand.”

He has had his eye on the corner unit for some years, but it was never quite big enough. When a former newsagent came up for grabs next door the landlord offered him two units together. “I think corners are very important, especially with the idea of the British corner shop,” he muses. Working with 6a Architects, with whom Anderson collaborated on the Disobedient Bodies show he curated at the Hepworth Wakefield gallery in 2017, he was determined to do something “entrepreneurial” with the space that made sure it didn’t fall into the gentrification trap. “Our next-door neighbour is a slot machines shop. We wanted to make sure that whatever we did would fit into the ethos of Soho, something that reflected the materials used in newsagents.” 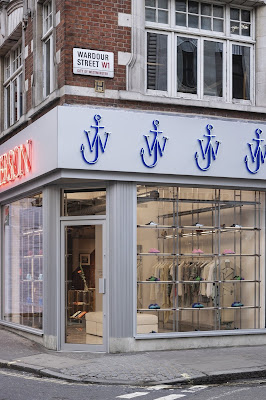 Anderson, who was raised in a town in Ulster, in Northern Ireland, had little experience of luxury shopping as a teenager. “The first time I went to a luxury store was in Belfast, it was called The Library. It had Evisu.” His original exposure to a big name brand was visiting the Louis Vuitton flagship in Belfast. “I was mesmerised by the beautiful fresh flowers, the catalogue.” He famously spent the early part of his career working for Manuela Pavesi, formerly Miuccia Prada’s right-hand woman until her death in 2015, as a visual merchandiser. “I’ve always been a store eccentric in that way. I believe there is still this massive place for shopping, [even] as we become more digitised.”

The Soho shop has a cosy domesticity – all plush blue carpet, glossy walnut veneered cabinets, and brass-edged glass vitrines. This is something it has in common with Anderson’s Loewe store, on nearby Bond Street. “It’s a domestic landscape,” he says. “It’s carpeted, it’s very quiet, the lighting is not harsh. There’s nothing worse than when you go into a store and the lighting is incredibly bright, like a supermarket.” He’s eschewed a Michel Gaubert playlist for something less obvious that could be classed as background music. “The most amazing thing about Soho is that there’s an energy and noise that you need, and I didn’t want the music to be overbearing,” he clarifies. In place of showy art, there is a simple Anthea Hamilton photograph from a series taken at Kettle’s Yard. “It was quite nice when 6a came with their proposal because the photograph was on the moodboard – and I had actually purchased it already,” he says.

He is keen to use the space as a cultural repository. The store will host collaborations with queer artists, literary salons, and celebrate Gay Pride. “We’ve worked a lot over the last 10 years with queer artists and queer charities – we were thinking, can we do a talks programme, do poetry readings, things with ceramics?” From April, the shop will also feature products under the “Made in Britain” upcycling umbrella project. “At Loewe we’ve been working on this too and it’s proving really successful: any product that we don’t end up selling, that’s either deadstock, vintage, we cut everything up, patchwork it together and resew it in the location. For me, the whole thing of sustainability is about experimentation – it’s not a PR thing. We have to look at the process of making clothing and make every single crumb count.”

The same sense of urgency emanates through every interview Anderson gives, every collection he unveils, every product he puts on the shelves. He seems pleased with this particular project, even when I bring up the global health pandemic one final time. “What is so fascinating about the millennial generation, or Gen Z, is that we have become a generation that is obsessed by doom!” he cries. “I don’t think we know the reality of doom. We are so lucky. If we take a bit of perspective, there are worse things happening in the world.”

Posted by FASHIONmode News at 7:32 PM