Held under the gilded ceilings of Paris’s opulent Hôtel de Ville, Andreas Kronthaler’s ninth collection for Vivienne Westwood featured plenty of talking points. Take the garlands of dried chillies and garlic bulbs that models wore around their necks – emblematic of the designer’s decision to present a collection meant to ward off negative energy. “I was trying to expel the evil spirits which are around,” he told British Vogue’s fashion news director Olivia Singer backstage. “The way you look, the way you dress – it’s a very, very powerful tool, and you have to make use of it. That’s what it was all about: dressing up.” 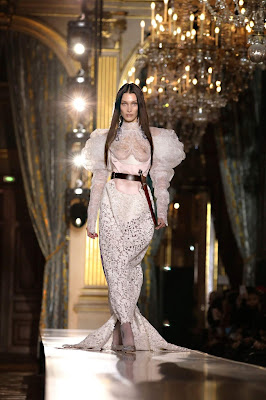 In practice, that meant streetwear-inspired updates on the traditional le blue de travail, or working-class blue uniforms established in France during the industrial revolution; ultraviolet tights studded with Swarovski crystals; hats that trailed floor-length multicoloured ribbons, or featured a tower of rainbow feathers capped with a bird’s nest; and giant earrings in the shape of the number nine – a symbol of “universal love, spiritual law and spiritual awakening, and service to mankind” according to the show notes.

The standout look from a collection full of head-turning moments? The balloon-sleeved lace wedding gown in which Bella Hadid closed the show. The younger member of the supermodel sister act strutted down the runway as electronic musician Susanne Oberbeck (aka No Bra) crooned politically-charged lyrics from her latest LP, Love + Power. Even more noteworthy than the romantic dress itself, however, were Hadid’s less-than-conventional bridal accessories: a pair of Swarovski-studded Gina court shoes and a dagger, which she gamely unsheathed on the catwalk. That’s one way to keep evil spirits away.

Posted by FASHIONmode News at 12:53 PM