Has Fashion Really Embraced Technology? We Chart the Ever Evolving Relationship Between Maker and Machine

“Even if you don’t like the idea: Technology rules the world because it changed the world,” Karl Lagerfeld observed in 2016, the year he sent models in robot masks down the runway. The question that needs asking as we enter a new decade is: Does fashion actually like technology?

Machines are used in all parts of the fashion process, from the farming of materials to inventory management to deliveries. E-commerce has completely transformed shopping; brick-and-mortar outlets have reacted by becoming destinations for experiences. Fashion designers, too, have been experimenting with new formats, including going straight to digital. The aim? The Instagram moment.

Social media’s intersection with fashion, I would argue, is less about the clothing than the person documenting the moment. But be that as it may, fashion has undoubtedly embraced technology as a marketing tool. And a democratizing one at that, as it has the capability of offering all-access passes to whomever is connected to a screen, whether that’s through 360-degree camera, livestreaming, or virtual reality. The logical next step is adding a meaningful, perhaps, immersive shopping component.

Our timeline of technology and fashion kicks off with Helmut Lang, who presented his fall 1998 collection via CD-ROM and the internet. “I sensed at the time that the internet would grow into something much bigger than imaginable, so I thought it was the right moment to challenge the norm and present the collection online,” Lang told me years after the fact. “It was a shock to the system, but a beginning of the new normal.” Part of the appeal of a digital format, he explained, was giving consumers access “to an unfiltered view of my work.”

When Style.com launched in the summer of 2000, not all designers were so open to the idea. If I remember correctly, copying was a concern, but soon we were off and running, offering access and informed discourse about shows. The democratization of fashion (at least in terms of access to information—the market is still stratified and organized into categories like mass and luxury) continued in the late ’00s with the explosion of street-style photography and the emergence of a pack of bloggers who were filtering fashion through their personal lenses and recording it on laptops in the front row at Dolce & Gabbana, and through the internet and the industry’s favorite plaything, Instagram. Today, fashion adapts to Instagram rather than the other way around.

I can’t help but note that many of these advances are happening around clothing, but not to garments themselves. Aesthetically, retro-futurism, often rendered in space-age silver and white, remains shorthand for modern or tech. Ironically, it’s often the items that don’t look like fashion that are the most advanced of all. (Think active sportswear that responds to temperature changes, etc.) There are very few designers, Hussein Chalayan being a notable exception, who have really thought about mechanizing garments and transforming them into machines for living and making them fashion. That integration of functionality and style is the new frontier, and the future. 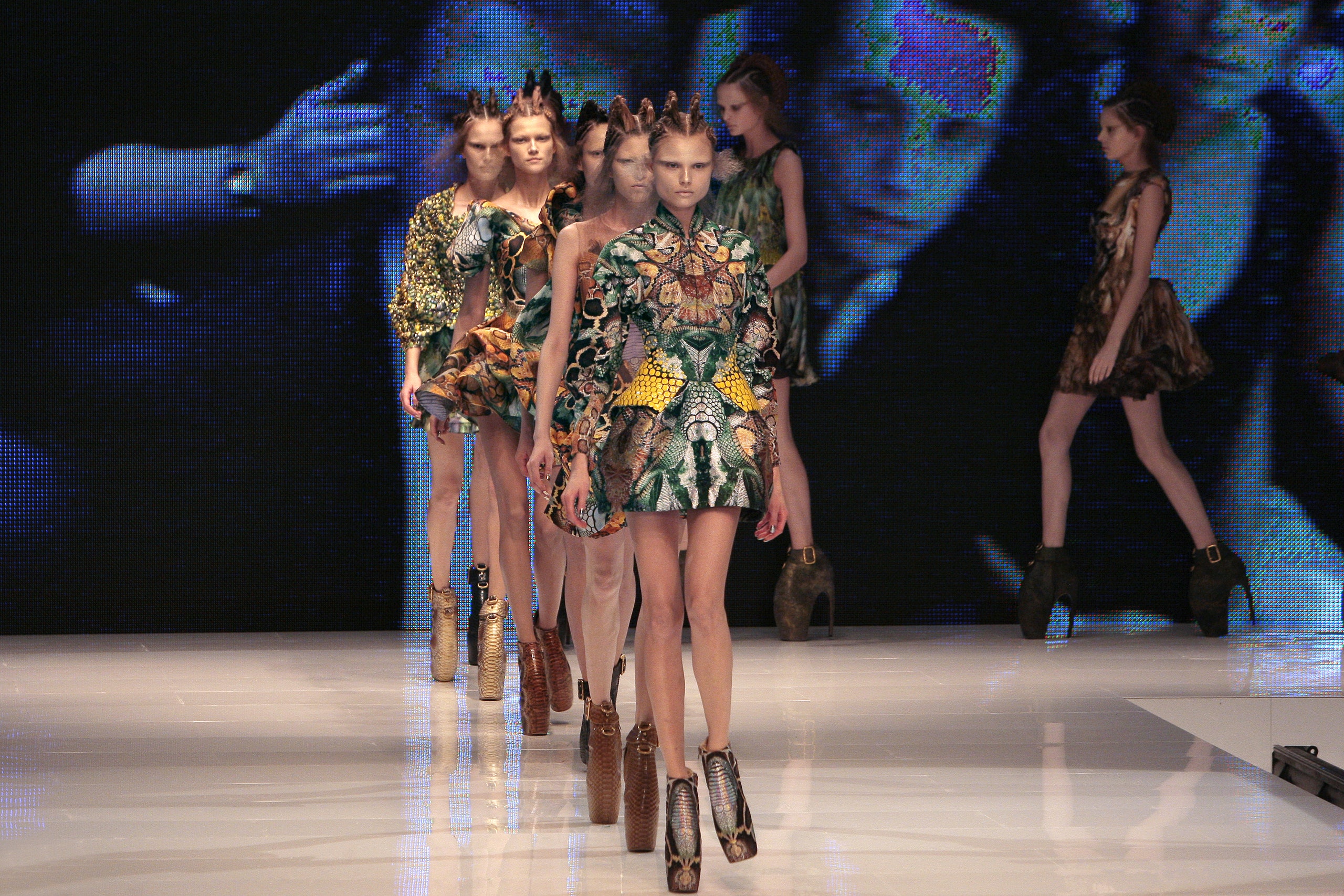 Helmut Lang sets the fashion machine in motion when he presents his fall 1998 collection via CD-ROM and the internet. (He’d do the same with his spring 2001 collection, following 9/11.)

Hussein Chalayan was one of the first designers to incorporate technology into his designs; it’s a quest he has not abandoned. One of the standouts of his spring 2000 show was the “airplane dress,” with flaps that were put into motion by remote control.

For spring 2000 Donatella Versace showed the jungle-print dress that Jennifer Lopez wore to the 2000 Grammy Awards. The image of J.Lo in “that dress” was so searched for, it inspired the creation of Google Images.

Up until the finale of McQueen’s fall 2006 Widows of Culloden collection, it seemed to be a celebration of Victoriana and Charles Dickens via Miss Havisham. The unforgettable hologram of Kate Moss that closed the show was very of the moment.

For spring 2007, Chalayan provided his audience with a survey of fashion history via a series of mechanically morphing dresses. Here was wearable tech hardwired with romance.

McQueen partnered with Nick Knight’s ShowStudio to create history: Plato’s Atlantis, the designer’s spring 2010 outing, was the first to be livestreamed. Further disrupting the system, motion-controlled robots on tracks filmed both the models coming down the runway and the front row, offering a real 360-degree view of a fashion show.

The front row of Dolce & Gabbana’s spring 2010 front row was filled with laptop-carrying online personalities (influencers in today’s parlance). It was a fashion moment, as was Tavi Gevinson’s appearance, in a giant bow-shaped hat at Christian Dior’s fall 2010 show, causing a journalist sitting behind her to complain about having to watch the show through said hat. The meeting of the old guard and new was not without its snags.

In the lead-up to her spring 2013 show, in which models wore Google glasses, Diane von Furstenberg recorded her preparations using the ultimately ill-fated device.

Dutch designer Iris van Herpen upended the idea of customization that is central to couture by making dresses to exact specifications using 3D printing. For her spring 2013 collection, she applied the technology to flexible materials for the first time; she also collaborated with artist Carlos Van Camp, who conducted electricity while wearing a specially designed Van Herpen suit.

Ralph Lauren’s Polo for Women line is presented in the form of a 4D holographic light show projected onto the spray of water spouting from the lake in Central Park.

Marc Jacobs created an immersive sound experience at his spring 2015 show with a specially designed vocal narrative that guests listened to using the Beats by Dre headsets left on seats. “The idea was to put everybody in their own world,” Jacobs said.

The ethereal finale to Richard Nicoll’s spring 2015 collection was a simple shift made of LED-operated fiber-optic fabric.

Misha Nonoo trades in the traditional fashion show format in favor of an Insta-show.

At Dolce & Gabbana’s spring show, models take selfies of themselves while walking down the runway. These images are projected onto giant screens in the venue and posted on the brand’s social media platforms.

Users who downloaded the Runway by SAP app could watch, select, and rate their favorite looks from Badgley Mischka’s fall 2018 show. By spring 2020 the app had been further enhanced to allow for shopping, simultaneous photography, and more.

Dolce & Gabbana’s fall 2018 show opens with an army of drones carrying the brand’s newest handbags that emerge from the baroque set.

Selfie-loving Olivier Rousteing’s launches a Balmain Snapchat beauty filter that promised insta-glam. It was a fitting accessory for his very kira-kira collection of fall 2018.

Coperni designers Sébastien Meyer and Arnaud Vaillant go straight to Instagram with their fall 2019 collection, inviting users to interact with the lineup with a virtual experience via @copernize_your_life, modeled on the Choose Your Own Adventure books.

“Smash the control images. Smash the control machine. Proclaim a new era. Set up a new calendar, Nothing is true. Everything is permitted. I strive to live up to my words. Out of control.” Yang Li posted that message on his brand account in advance of his straight-to-Instagram fall 2019 collection and on those of the 27 women he asked to take selfies wearing the clothes he had sent.

Rihanna’s Savage x Fenty show, presented to a by-invitation audience who had to relinquish their cell phones at the door, is filmed to stream on Amazon Prime soon after.

The TommyNow x Zendaya fall 2019 show was not only recorded using 360-degree cameras for that true-to-life feeling, but insider access was also offered through a web-based VR (shopping) experience through tommy.com.

Rag & Bone’s Marcus Wainwright offers a multisensory experience for spring 2020 with modern dancers, musicians, the Brooklyn Youth Chorus, and a robot shooting video that played on LED screens during the show, which was also livestreamed on Instagram.

Wanting to capture the movement in clothes, An Vandevorst and Filip Arickx asked photographer Steven Sebring to capture their fall 2019 collection with his a 360-degree camera, which creates 3D holographic fashion images. This was their way of rethinking the fashion show. “With this way of filming,” Arickx said, “we could achieve that same experience, and it’s even easy to share with people all over the world.” Zac Posen, aiming for a balletic effect, worked with Sebring on his final collection, for spring 2020.

In Copenhagen, the fall 2020 season opens with Carcel’s statement-making non-show. There were rows of chairs and a video, but no clothes and no models. We “asked everyone to step up to the runway to change the industry together, abandon broken systems, and create a new vision for fashion in society,” brand founder Veronica D’Souza announced on Instagram.

Posted by FASHIONmode News at 10:24 AM