It’s with some restraint that I’m going to spare you the fashion-related puns about shoes to fill and modelling being in the genes. After all, the more Lottie Moss’ face is spread across magazine pages and the tangled web of the internet, the more those pun-filled headlines will pop up like wild mushrooms after the autumn rain. And if this debut photo shoot is anything to go by Lottie has plenty of career potential, so it’s a face we'll see more of. 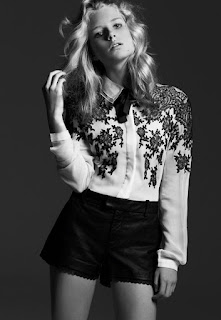 Though half-sister to the world famous supermodel, it’s clear that Kate Moss and Lottie both inherited doe eyes, a small frame, and an uncanny ability to sustain deliberately dishevelled bed hair. With a head start down a modelling path paved in gold by her half-sister before her, it shouldn’t be difficult for Lottie to see the contracts rolling in. It just depends on whether she choses to pursue them or not.
Posted by FASHIONmode News at 10:12 AM No comments: