Grace Coddington for FNO and Balenciaga

Grace Coddington has designed a limited edition accessories line for Balenciaga. The US Vogue creative director has created a mini collection of bags and scarfs, inspired by her pet cat Pumpkin. 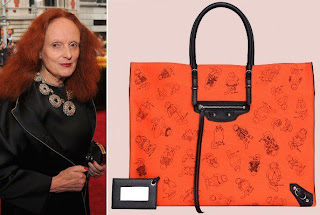 The pieces feature fashion illustrations hand-drawn by Coddington, which depict her cat modelling iconic Nicholas Ghesquière for Balenciaga looks from the past decade. The Papier tote bag, $1,000 (£633), is the collection's hero piece and comes in either ecru or bright pumpkin orange, with a black calfskin trim.

The Pumpkin collection will launch on September 6 to coincide with Vogue's Fashion´s Night Out celebrations, and a very limited number will be available to buy in the Balenciaga New York and LA boutiques. 20 per cent of all proceeds will go towards The Animal Rescue Fund of The Hamptons.

Posted by FASHIONmode News at 5:25 PM No comments:

Victoria Beckham is adding a new range of optical frames to her fashion portfolio.

The designer, who is near-sighted herself, has been on a mission for the perfect prescription frames for as long as she can remember, admitting that she’s never photographed in glasses (except for oversize sunglasses) because it’s been trying to find a flattering pair.

“I do need to wear glasses — [but] I haven’t found glasses that suit me or that I particularly like,” Beckham told WWD. “I’ve always been quite self-conscious [about this], so that’s why I’ve decided to do them myself.”

After the designer launched sunglasses two years ago, an optical collection was the obvious next step. Beckham’s global eyewear business spans Bergdorf Goodman and Neiman Marcus in the U.S. to Harrods in the U.K.

She partnered with Cutler & Gross on the six-piece optical collection that will make its debut at Silmo Paris on Oct. 4. Each style comes in three colorways, with the overall palette comprised of black, tortoise, topaz, yellow and forest green. All frames are handcrafted in Italy and fashioned from combinations of metal and acetate, the tips of each pair are adorned with a refined, diamond faceted “V.” They also contain elements such as sepia stained coloring, horn, pearl oyster interior lining and tortoiseshell. 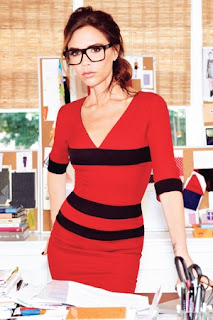 Silhouettes range from delicate and feminine styles such as superlight metal aviators to heavier, acetate rectangular shapes. Some are even unisex — such as the “Heavy Square,” a bolder frame that Beckham and her husband David Beckham both wear.

Each pair goes through four weeks of production and 37 assembly processes. This means frames are “tumbled” for nearly a week with resin chips and undergo two stages of hand polishing. Each pair will retail for about $410.

“I will be wearing my glasses now, and it will be nice to see where I will be going for once,” Beckham said.

The optical frames are slated to hit retailers in January and February.
Posted by FASHIONmode News at 9:31 PM No comments: