Chanel’s Virginie Viard wants us to stride into autumn/winter 2020 wearing a pair of sleek two-tone riding boots. The equestrian footwear accentuated every look worn by models – from Gigi Hadid to Kaia Gerber – who walked in pairs and trios down the mirrored runway in Paris.

The knee-length, slouchy boots were inspired by Viard’s predecessors. Exhibit one: a photo of Karl Lagerfeld dressed in a striped suit while wearing a pair of riding boots. Exhibit two: Gabrielle “Coco” Chanel and her beloved racehorse, Romantica. The footwear – which was originally worn by male riders in the 15th century – comes with a modern redesign for autumn/winter 2020. The supple leather style comes with a squared heel, rounded toe and a turn down of tan for a pirate-esque flourish. 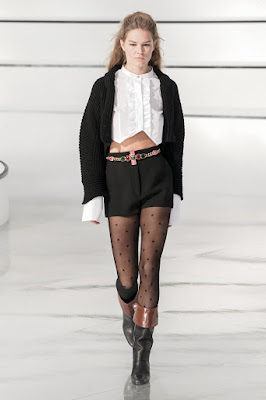 The equestrian theme was woven into the entire collection, from jodhpurs to jockey silks. Look 61 paid homage to the black maxiskirts and loose-fitting trousers, and soft, frilled shirts that upper class female riders first wore to ride and roam the countryside in Europe at the turn of the century.

While channelling the idea of women “who are as feminine as they are amazons” (a nod to the French film Les Biches), Viard’s “new ode” to Chanel put the Parisian boot front and centre for next season. Bookmark it now.

Posted by FASHIONmode News at 9:22 AM