This season, the runways were saturated in statements—of color and sparkle, individuality and sustainability—above the neck. To start, the Euphoria effect took hold in mesmerizing, make-believe fashion. It all began with the free-form eye etchings at Anna Sui and Rosie Assoulin in New York, then continued onwards with the shimmering ’70s-disco-meets-’90s-rave gazes at House of Holland in London and glitter tears at Fendi in Milan. The grand finale of escapist, Gen Z–luring beauty? That would be the meteor-shower-inspired swathes of sparkle at Off-White and the myriad of crystalized gazes at Schiaparelli in Paris.

A similar go-big-or-go-home energy was palpable in the array of sky-bound hairstyles—see the towering texture styles at Christopher John Rogers or the reimagined Marie Antoinette poufs at Thom Browne—as well as the playful applications of spring florals seen at Marni, with striking hair sculptures, and Giambattista Valli, with fresh-from-the-garden eye masks. Then, there were the dizzying braids that came down the runway, with this season shining a special spotlight on talented braiders such as Guyanese hairstylist Nigella Miller, who helped create the embellished braids at Pyer Moss and South London–based Latarra, who wove the close-cropped, geometric-plaited styles at Gucci. Here, from New York to Paris, the hair and makeup trends that emerged from the Spring 2020 shows.

Braids That Inspire and Mesmerize 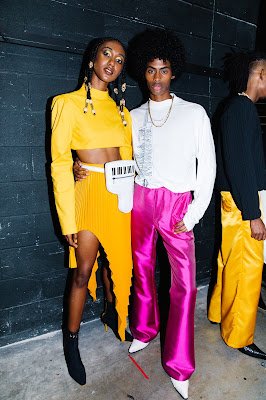 While there were a plethora of braids this season, the biggest standouts sent a message. With a mission to create a sustainable, electricity-free style at Gabriela Hearst, hairstylist James Pecis braided a commanding high-gloss rope braid, no heat-styling necessary. And in a similar spirit of challenging industry standards at Pyer Moss, lead hairstylist Jon Reyman collaborated with hairstylist Nigella Miller on a beautiful array of loc styles and jewel-adorned braids. “It was nice to be able to demonstrate what black hair is supposed to look like as opposed to being overlooked in the industry,” Miller wrote on Instagram following the show. Then at Gucci, Paul Hanlon tapped braider Latarra to create the show’s close-cropped, geometric-plaited styles and made a point of giving her due credit when he shared the looks on social media.

New Romantic Hair Comes in All Shapes and Sizes 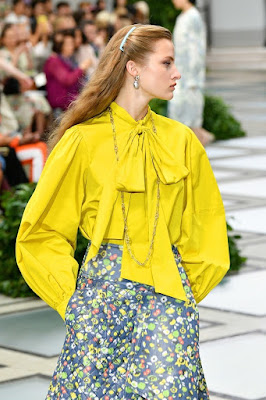 It all began in New York at Tory Burch, where hair pro Guido Palau put an ironic twist on the Sloane Ranger look by fastening pastel combs with a deep side part and sculptural waves to New Romantic effect. Then, the swept-across look made its way across the pond at Marques’Almeida, where hair of all textures (bleached waves! Auburn spirals! Raven corkscrews!) fell insouciantly over the brow. In Paris, Palau offered further contemplation of the look by bringing it back to its roots in the ’40s, riffing on the decade idiosyncratically at Chloé with polished and sculptural yet “boyish” updos, and then at Miu Miu, where he used traditional tissue sets for soft ringlets, molding them into a voluminous, coiffed half-up style. 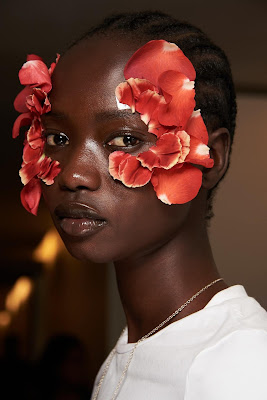 Florals for spring? Not exactly groundbreaking, but more exciting than ever on the beauty front, thanks to some unexpected applications across the four weeks. First, there were the bevy of flower-power looks at Marc Jacobs, from giant flower-topped afros to Kaia Gerber’s bloom-adorned bouffant. In London, Ashish and Bora Aksu each applied fresh flowers to the hair, and in Milan, blooms were aplenty at both Marni and Missoni; the former furthering its sustainability narrative with clay-slicked, floral-bedecked updos and the latter offering a bohemian-chic alternative for traditional wedding updos with sprigs of garden flowers tucked into deconstructed knots. Finally, at Giambattista Valli, supercharged dewy skin was decorated with pastel petals across gazes to create next-level eye adornments.

The Euphoria Effect Is Real 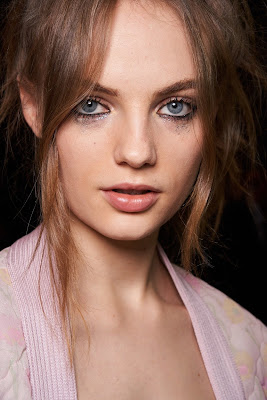 More color! More sparkle! More shine! HBO’s hit show Euphoria has not only sparked a makeup movement among Gen Z-ers, but fashion diehards as well. There were the equal parts abstract and vivid eyeliner designs that appeared at Anna Sui and Rosie Assoulin, followed by House of Holland’s neon-bright holographic encasings, Fendi’s “morning-after” cascades of silver glitter, and Giorgio Armani’s translucent sequin-pressed lids in Milan. And because, of course, Paris could be relied upon for hyper-real drama, there were the meteor-shower-inspired dustings of metallic silver glitter and loose octagon sequins at Off-White as well as the jaw-dropping face jewelry designs at Schiaparelli, which ran the gamut from metallic silver to gradient rainbow. 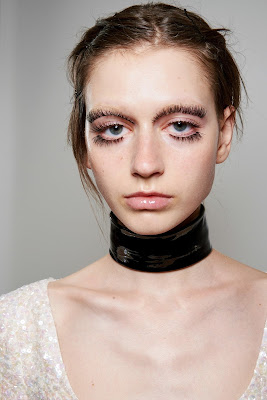 Amid the 60 individual looks at Marc Jacobs, there was one model who played the spitting image of Liza Minnelli, complete with the superstar’s spidery, exaggerated fringe. Lashes were further highlighted at Gucci thanks to makeup artist Thomas de Kluyver, who can always be relied upon to subvert beauty conventions. For Spring 2020, he applied stacks of false lashes on the eyes and brows for a kitschy, off-kilter vibe. The playfulness continued at Olivier Theyskens, where Isamaya Ffrench layered extra-long extensions in coats of onyx mascara, then at Valentino, with the legendary Pat McGrath digging into her ’90s couture show kits for heavy-metal gold fringe falsies that would glitter and glisten on the runway.

Lips Get the Vinyl Treatment 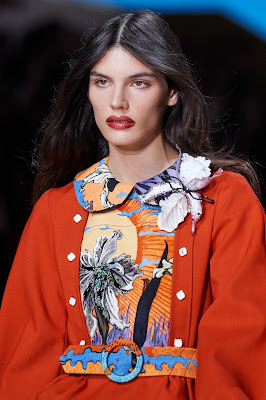 With fluidity as an essential code for Gucci under designer Alessandro Michele, de Kluyver gave models of all genders a slick of translucent gloss for Spring. Then at Off-White, makeup artist Fara Homidi mixed up a custom “super-nude gloss” and coated each mouth to continue the show’s high-shine, season-to-season beauty signature. And on the final day of Paris Fashion Week, Chanel presented a more vivid take on gloss with a diffused wash of coral pink, while Louis Vuitton served up heavily lined crimson pouts that were steeped in shine.

The Big-Hair Bar Is Set Higher and Higher 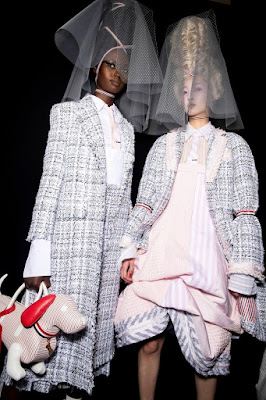