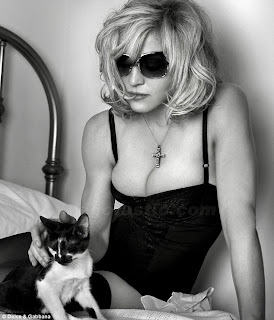 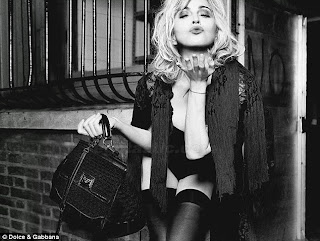 Posted by FASHIONmode News at 8:35 PM No comments:

Come November this look will feel far too light, but while we're yet to encounter the colder weather of  Autumn & Winter 2010, fine knits are still very much a wardrobe option.
Hence here's a look that indulges in the coming season's trend, over the knee socks and pairs it with a crescent-cut cardigan. 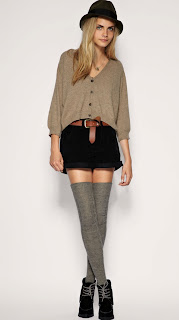 Coming Next Week: Military Fashion For Men and Women.
Posted by FASHIONmode News at 3:24 PM No comments:

Plus Size Models At Fashion Week?

Fashion lovers got a glimpse at an alternative universe yesterday, as Canadian designer Mark Fast sent 'plus size' models down the runway at London Fashion Week.
While noticeably larger than the average catwalk model, the women were by no means overweight.Instead the models were a size 14 or 16, a healthy dress for their above average height.

The knitwear designer likes to use a mix of different sized models in his shows, to prove that the clinging designs look good on every bodyshape. These include size 16 Crystal Renn, who walked out in a bright red dress yesterday.

But not everyone welcomes Fast breaking the mould.Last year Fast's stylist and creative director walked out three days before his show, apparently in protest at being asked to work with the 'plus size' models.But this year the show went without a hitch. London modelling agency 12+ UK supplied the models.

Founder Sarah Watkinson said 29-year-old Fast was dedicated to using real-looking women.But she added that no other Fashion Week designers had sought models from her.

Posted by FASHIONmode News at 3:12 PM No comments:

Airbrushed celebrity photos should be labelled to help tackle "damaging and unrealistic pressures" on young women, the UK's biggest girls' group has said.
Liz Burnley, of Girlguiding UK, said "unobtainable ideals" affected young girls "badly", and urged the government to introduce compulsory labelling.
A Girlguiding poll of 1,109 girls found 50% of those aged 16 to 21 consider having surgery to change their looks.Some 42% of 11 to 16-year-olds admitted watching what they ate.

They need to cherish themselves from their heads to their tip-toes, embracing both their beauty and their flaws”

Ms Burnley said: "We know how profoundly they feel the pressure to conform to a particular body image and how badly they can be affected by these unobtainable ideals.
"We are proud to support the calls of our members who believe that it is time that the prime minister addressed their concerns and acted in the interests of girls and young women across the country."
Some 20,000 Guides currently taking part in an annual camp in West Yorkshire are being encouraged to sign a petition calling for David Cameron to introduce a law forcing magazines to inform readers when photographs have been airbrushed.

Susan Ringwood, of eating disorder charity Beat, said they were committed to working with Girlguiding UK to make "this important call to action a reality".
"Young people with eating disorders tell us that being surrounded everyday by pictures of unnaturally 'perfect' bodies makes their own recovery so much more difficult to achieve," she said.
"We know the difference it would make to all young people's self-esteem and body confidence if they could be sure which of the images they see are natural and true to life."

Singer Javine Hylton backed the campaign, saying girls "needed to learn to be confident with their bodies".
"They need to cherish themselves from their heads to their tip-toes, embracing both their beauty and their flaws," she said.
Last month, Equalities Minister Lynne Featherstone said she wanted to see an end to airbrushing, or the introduction of a kitemark to indicate where images have been altered.

But she said she had "no desire to impose regulation or restriction on advertisers or others", and hoped they would make changes to their practices on a voluntary basis.

The Girls' Attitudes survey was carried out online in July 2009 and included both Girlguiding members and non-members. 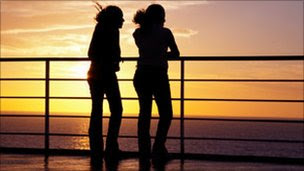 Posted by FASHIONmode News at 3:03 PM No comments:

Not only waif-like young women are  starving themselves to get the work they crave.
As they sashay along the catwalks for the beginning of London Fashion Week today, stick-thin models will be the centre of attention. Yet not all will be women: boys are now under pressure to achieve "size zero" figures, too. As fashion experts yesterday added to the row over skinny models, male stars of the shows revealed they are coming under enormous pressure to slim down to dangerously low weights. They say designers no longer want a buffed, toned male body to show off their clothes. Instead, they want waifs who can rival women in slenderness and androgynous looks.
One model, Ron Saxen, has written a book about his ordeal. It details how the pressure to be slim led to a battle with anorexia which, he says, almost killed him as he desperately tried to keep himself in work.
"My routine would be to get up, have a cup of coffee, run five miles, have another cup of coffee, cycle 20 miles, have a break and then swim 20 lengths of the pool," said Mr Saxen. "I put a lot of pressure on my heart. I had come down to 205lb, but I needed to get down to around 175lb to be a model. So I did it, and at 6ft 1in I was mostly skin and bones. But I got a contract."
Dior is one of the fashion houses leading the demand for stick-thin young men. Chris Ulyatt, 19, modelled for Dior last year. At 6ft 2in, he weighs only 10 stone."I was approached in the street by the head of Dior Homme," said Mr Ulyatt. "He was on what's called a boy safari. All the lads on the catwalk were tall and skinny and androgynous-looking. It's what they go for."
Health experts are warning of more men developing eating disorders. Janet Treasure, director of the eating disorders unit and professor of psychiatry at Guy's, King's and St Thomas' medical school in London, said that images of male models had an effect on men that was comparable with the size-zero fad among women.
The London Development Agency, which sponsors London Fashion Week, is to look at the pressure put on models to be thin and will examine whether the promotion of size-zero models leads to eating disorders.
The Slim Line 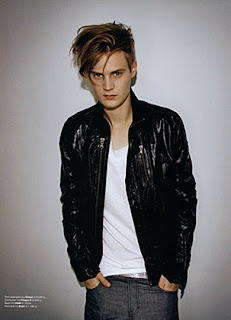 Posted by FASHIONmode News at 2:57 PM No comments:

Ever wondered what happens behind the scenes in fashion? Behind the highly polished glitz and glam? The chaos, the tranquility, the style and of course the gossip. Episode Backstage will take you to the places you want to access. See the world from our eyes, the good, the bad and the beautiful.

We believe in order to work in fashion, you have to have a passion for fashion. Therefore, we will keep you updated on all aspects of the industry such as: Style / Trends, Photography, Model Management, Events, Celebrities and General Fashion News 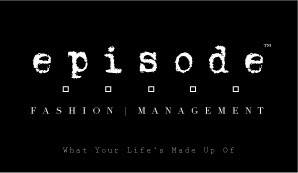 Posted by FASHIONmode News at 1:11 PM No comments: