In a Paris Fashion Week plagued by fears of the coronavirus epidemic – not to mention the industry’s ongoing critical self-appraisal when it comes to sustainability – Demna Gvasalia left the mood-boosting escapism to Kanye West’s Sunday Service, instead presenting an autumn/winter 2020 collection for Balenciaga that put the omnipresent threat of climate change front and centre. The artistic director has never shied away from confronting unsettling political truths with his set design– see his pointed EU blue show for spring/summer 2020 – and this season was no different. 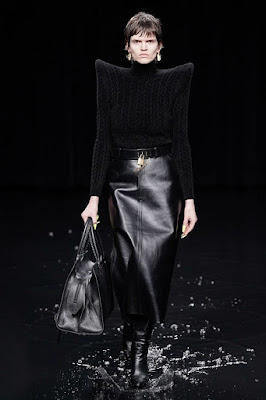 The Vetements founder invited fashion editors to a film studio in Saint-Denis – where he had deliberately flooded the centre of the amphitheatre in an unsettling reference to the incontrovertible fact that oceans are rising. With the first few rows of seats appearing to be underwater, the glitterati was forced to take in the collection from the third row or beyond – not least to avoid being splashed by the street-cast models as they strutted through the ankle-deep water.

More ominous than the biblical flooding itself? The vast LED screen suspended above it on the ceiling: playing out foreboding images in rapid succession, from a Hitchcockian swarm of crows to boiling lava and flames. As Matrix-esque leather coats, Balenciaga Football Club kits, and anabolic Bodybuilder suits were paraded in front of showgoers, the water reflected the eerie scenes presented above in the dark auditorium. Helping to act as a balm to the fire and brimstone messaging? A range of glittering body-con dresses sure to become red-carpet favourites. The world, it seems, will go out with a disco, not a bang.

Posted by FASHIONmode News at 12:55 PM