Jean Paul Gaultier Hands Over His Couture Atelier To Sacai

When Jean Paul Gaultier announced that his spring/summer 2020 haute couture show would be his final catwalk spectacular, he left us with the promise that his couture line would “continue with a new concept”. The king of kitsch has now revealed that he is handing over the reigns to Sacai designer Chitose Abe. Abe will design the autumn/winter 2020 couture collection, before Gaultier then invites another creative into his atelier for the following season. This revolving door of fashion talent will revitalise a house that has been a firm fixture on the Fédération de la Haute Couture schedule since 1997, and give younger designers an unprecedented opportunity to put their stamp on a legacy household-name brand.

“I am pleased that this concept [which came to Gaultier in the ’90s] will become reality now with Chitose Abe of Sacai as the first guest designer,” Gaultier said in a statement, published by WWD. “I admire her work, we have many things in common creatively and a similar vision of fashion. I am glad to give her complete freedom.”

What are Abe’s intentions? The Japanese designer, who is a master of slicing, splicing and manipulating fabrics into energising new combinations, said she was honoured to be the first custodian of the French house. “I have a long-held admiration for Jean Paul’s unique vision of subversive femininity and his originality, both of which I’ve strived towards in my work since the beginning,” she said. 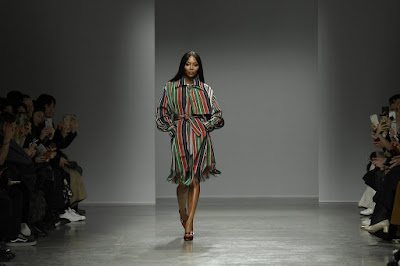 Abe already has a series of cult collaborations under her belt. Every second guest at her spring/summer 2020 show wore Sacai x Nike trainers; and her 2019 Beats by Dre line, 2018 Ugg shoes and 2017 North Face utility wear have all given her an opportunity to demonstrate new skills and build Sacai’s profile.

Abe has an innate ability to surprise, but in a quieter way than Gaultier’s signature showmanship. Whether she will stick to the provocateur’s diverse casting – his January swansong saw supermodels walk alongside Pedro Almodóvar muse Rossy de Palma, legendary chanteuse Amanda Lear, French cinema icon Béatrice Dalle and former Miss France Iris Mittenaere, with performances by Catherine Ringer of Les Rita Mitsouko and Boy George – is unclear. But there will be plenty of loyal Gaultier worshippers who will undoubtedly put themselves forward to be a part of this new chapter in couture fashion.

To see Abe take on the sex, androgyny, corsetry, sailor stripes and conical bras that are part and parcel of Gaultier’s brand image will be a highlight of the autumn/winter 2020 couture schedule, along with the return of Balenciaga. Abe and Demna Gvasalia could be the new mix masters primed to take couture into a new decade.

Posted by FASHIONmode News at 1:54 PM