How Fashion Is Doing Its Part To Help Stop Coronavirus Spreading

After donating $2.2 million (£1.8 million) to the Red Cross in China last month, LVMH is continuing to aid in the fight against coronavirus. This week, the company announced that it would use its luxury perfume and cosmetics factories to produce free sanitising gel for local hospitals and authorities in France. As is the case around the world, antiviral supplies are running out quickly there.

LVMH’s move is likely to inspire other large businesses with their own supply chains to follow suit. But it isn’t the only major fashion player giving back during this time of global crisis. In fact, last week, the Italian fashion entrepreneur Chiara Ferragni launched her own online fundraising campaign and it has already raised more than $4 million (£3.2 million) for Italian hospitals.


As the fight to contain the pandemic rages on across the world, more and more of fashion’s most powerful brands are working to provide aid to the global medical community and to victims of the virus. Here, we’ve put together a list of the industry leaders who are donating money and supplies in the fight against COVID-19. 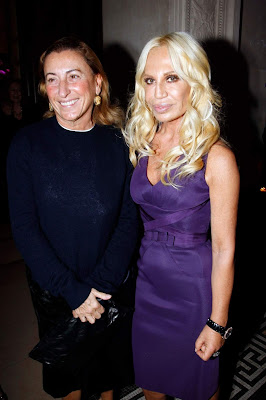 Prada announced that the company would be funding two new ICUs in three of Milan’s hospitals: Sacco, San Raffaele, and Vittore Buzzi. Donatella Versace and her daughter Allegra Versace Beck have pledged more than $200,000 (£164,000) to the intensive care units of the San Raffaele hospital in Milan.

Early last month, Bulgari contributed to the research department at the Istituto Lazzaro Spallanzani in Rome, which was working to purchase a microscopic image acquisition system to help fight and prevent the spread of COVID-19. Giorgio Armani donated nearly $1.4 million (£1.2 million) to various hospitals around Italy, namely those larger establishments in Rome and Milan.

Renzo Rosso’s Only The Brave Foundation shared an Instagram asking followers to donate directly to the foundation so that they can distribute funds to smaller, more localised community organisations.

Posted by FASHIONmode News at 11:01 AM