Before the fashion pack dashes for the Eurostar after the Louis Vuitton presentation tomorrow night – the last show on the autumn/winter 2020 schedule – they will have one non-negotiable stop-off in the 8th arrondissement. Paco Rabanne opens the doors to its shiny new boutique at 54 rue du Faubourg Saint-Honoré on the morning of 3rd March.

“For me, shops are important as they allow customers to fully experience a brand universe,” creative director Julien Dossena tells British Vogue of the decision to open a second retail space in the French capital. “A store is the final, and maybe, the most compelling manifestation of a brand expression.”

Dossena, who cites Prada’s Tokyo outpost as his favourite store, worked with Belgian architecture studio, Office KGDVS, to realise a boutique that was both future-facing, through the use of technology, and “comfortable” to spend time in. “We wanted it to be accessible and relaxed, but sharp and precise,” he explains. “That balance is really important in order for the customer to fully enjoy the time spent there.” 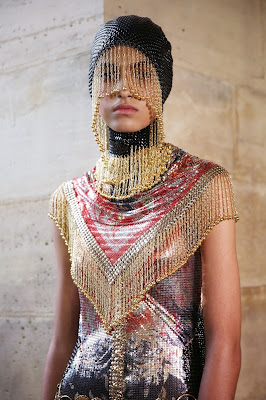 Office KGDVS facilitated high-resolution window displays and personalised touch-screen aids, but also mirrored surfaces and curtains inspired by the house chainmail. “We presented the mesh fringing first in Salone del Mobile in Milan two years ago,” enthuses Dossena. “It has since been a signature for us.”

In practice, the Instagram-worthy shop floors (there are three) sing of the same space-age chic themes that the French label was founded on in 1966. The sheen from the iridescent displays is dazzling, but for every 1969 Iconic, Nano and Sparkle bag on display – and inviting customers to touch its armour-like exterior – there’s a cosy corner, sometimes with headphones and TVs screening scenes from Dossena’s retro-futurist Paco-verse. To infinity and beyond… to rue du Faubourg Saint-Honoré.

Posted by FASHIONmode News at 9:42 AM