In a season uncharacteristically low on creative director debuts and final shows, Kenzo introduces its new designer Felipe Oliveira Baptista. The Portuguese creative director, who previously served at Lacoste, replaces Carol Lim and Humberto Leon and reintroduces Kenzo’s co-ed mainline show to the women’s ready-to-wear schedule after years on the men’s line-up. Witness his interpretation of the Kenzo legacy on 26 February.

On doctor’s orders, Virgil Abloh sat out his Off-White women’s show in September. The absence of the fan-worshipped designer, who serves as a symbol of many of the progressive changes the industry has undergone in recent years, reminded fashion just how important Abloh’s presence is in Paris, and beyond. After returning for his men’s shows in January, this season he is back to take his bow at the Off-White women’s runway on 27 February.

At the haute couture shows in January, Balenciaga announced the launch of haute couture under the avant-garde maison to be presented in July. The news has fuelled expectations around how Demna Gvasalia will approach this season’s ready-to-wear show and whetted the industry’s appetite for what’s to come. The show takes place on 1 March. 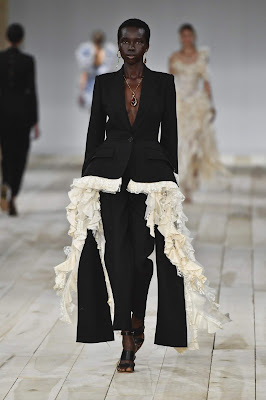 This season, the topic of sustainability has finally gone from feeling like a revelation to becoming a natural part of designers’ dialogues with their markets – and each other. As an early advocate for sustainability and now the formal advisor for LVMH on the matter, the industry is looking to Stella McCartney for new ideas and proposals for a sustainable industry. Watch how she takes the lead on 2 March.

At the Fashion Awards in December, Sarah Burton was honoured with the Trailblazer award, recognising a multiple-season run of consistently impressive collections that has cemented the Burtonic Age of Alexander McQueen. Presented just three weeks after the tenth anniversary of the death of Lee McQueen – for whom she worked since the mid-1990s – there are great expectations for Burton’s next at move at the house. Find out on 2 March.

The accomplishments and industry impact of Diane von Fürstenberg are widely known and celebrated. But the quintessential New York designer still has one honour to add to her list: on 28 March, the legend known as DVF will received the Légion d’Honneur for contributions to fashion, presented by the President of the European Central Bank, Christine Lagarde.

Posted by FASHIONmode News at 12:41 PM