Off-White Is The Most Popular Brand In The World Again

After taking a couple of months off on the advice of doctors due to “health considerations”, Virgil Abloh made a welcome return to Louis Vuitton in Paris in November. In August, he explained to Vogue that he was having a hard time “bouncing back” from an overseas trip. “I was just tired, so I went to the doctor. Ultimately,” he continued, “everything is fine, but the doctor told me ‘this pace that you’ve sort of pushed your body to fly all these miles, do all these different projects – is not good for your health.’” It seems it was a wise decision because as well as designing Hailey Bieber’s wedding dress for her big day with Justin Bieber on 30th September and opening a new store in Miami, the latest statistics from the fourth financial quarter show that Off-White is once again the most popular brand in the world.

The latest edition of the Lyst Index, the quarterly report that analyses the online shopping behaviour of more than nine million shoppers a month searching, browsing and buying fashion across 12,000 designers and e-stores ranks Off-White at the top of the leaderboard once again. Gucci has risen by one place to second, while Balenciaga has dropped to third. Moncler and Versace are fourth and fifth, respectively.

Interestingly, following the announcement in September that founder Vetements founder Demna Gvasalia will step down from the helm, the brand has fallen five places to 15th on the list. The Georgian designer, who is the creative director of Balenciaga, intends to “pursue new ventures”. It remains to be seen who will replace Gvasalia, but the designer, who cut his teeth at Maison Margiela and Louis Vuitton, will leave big shoes to fill. 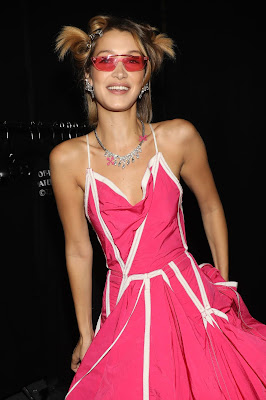 In keeping with its steady ranking, Balenciaga and Gucci have consistently ranked in the top three brands since the Lyst Index first launched, and fewer than two new labels have joined the list each quarter. So, which two made the grade this year? Canada Goose and Dr Martens. Thanks to celebrities such as Bella Hadid and Kendall Jenner refusing to be parted from their DMs, the company has witnessed searches for its “Farylle” boots increase by 151 per cent this quarter. Continuing the trend for stomper boots, Prada’s “Monolith” boots from the brand’s autumn/winter 2019 collection, have seen searches for the new style grow by 994 per cent as consumers’ interest in the lug-soled accessory fails to waver.

Lyst’s last report saw Bottega Veneta enter the rankings for the first time thanks to the impact creative director Daniel Lee has made at the Italian house. And its ascent continues, having moved up by two places after searches for the brand increased 32 per cent during the three-month period.

Take note: the Gucci logo belt is once again the world’s hottest fashion product (not brand), entering the Lyst Index for the 9th time in less than three years, and topping the list for the second time. While, Yeezy re-enters the 20 hottest brands list, climbing nine places to 16th position, thanks, in part, to the brand’s futuristic clog, dubbed ‘foam runner’ and made from an algae-derived material and set to go on sale this year.

The final Lyst Index of the decade hints at a shift towards a more sustainable and less streetwear-focused future. Off-White is a brand which is buoyed by consumer demand for hoodies, trainers and T-shirts, but Abloh has already predicted the death of streetwear in the coming decade. Does this indicate a swerve in its sartorial direction in the near future? With Abloh at its helm, anything is possible.

Posted by FASHIONmode News at 12:12 PM