Charlotte De Geyter and her mother, Bernadette De Geyter, often finish each other’s sentences. Speaking over the phone from their new studio in Antwerp, Belgium, the strikingly beautiful duo behind the successful dress label Bernadette were giggling as they spoke, giddy about the launch of their new bag collection. The debut line is an extension of their dreamy, floral-bedecked ready-to-wear. The leather clutches and top-handle mini bags are made in Italy and feature original prints, painted by Charlotte. As she explained, the idea to launch bags after only one year of business came to them quite organically. “We were doing a photo shoot, and while styling the dresses, we realized that we needed more accessories,” she said. “The model had a small, square-shaped vintage bag and we had some of our printed scarves, so we just wrapped the fabric around the bag, and it looked so cute all together. It was exactly what we needed.” 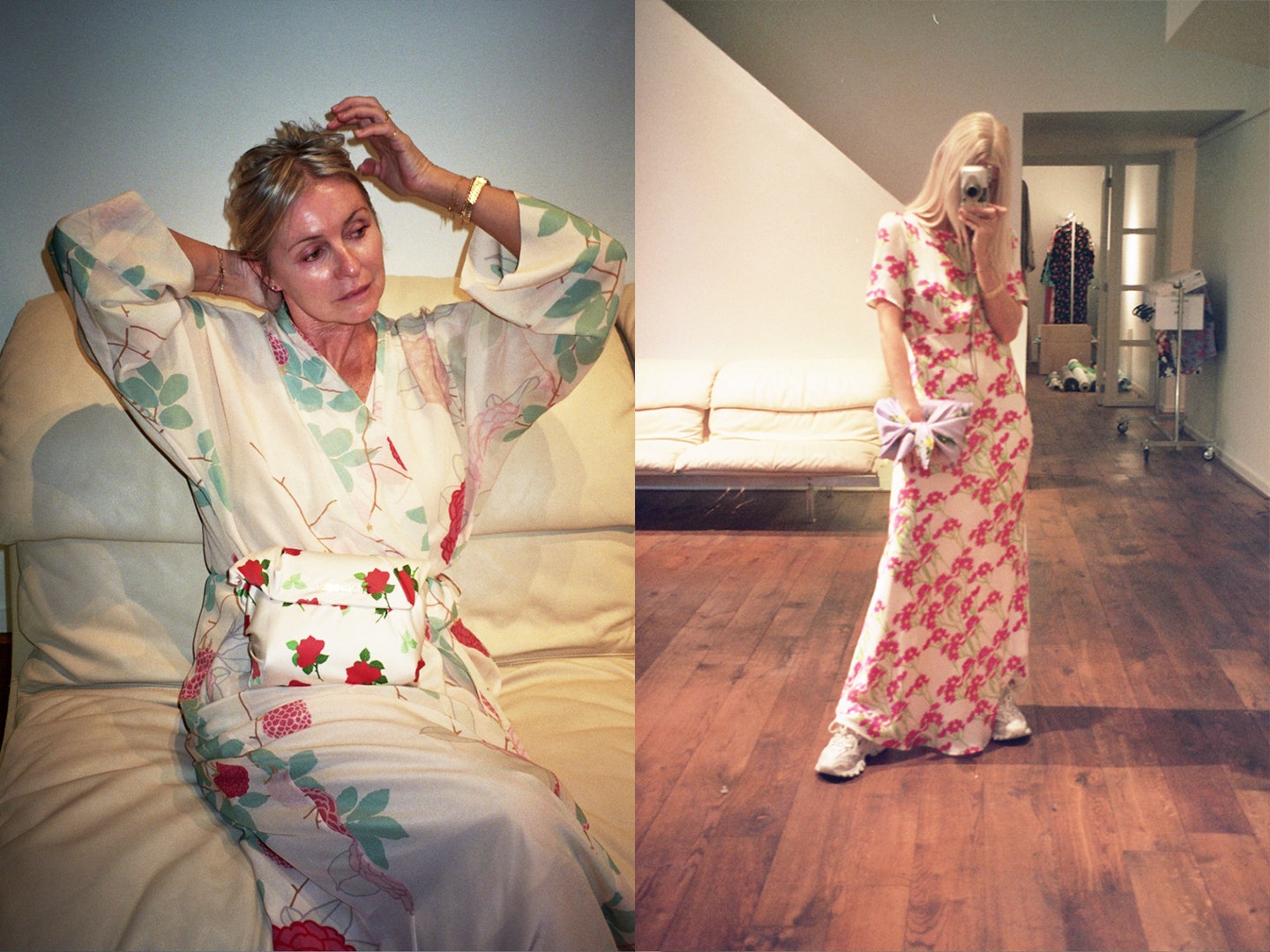 The De Geyters attribute their quick success to this kind of instinctual approach to design. They work side by side, with only one other employee, in their new, white-washed studio space (everything is white in the new atelier so that the clothes “really pop,” Bernadette says). “We’ve always been super close as a mom and daughter, and as friends,” Charlotte says. “But now we are business partners, and over the last 12 months, I think we’ve really learned how to work well with one another in this setting. We know what each of our strengths are.”

When starting a collection, Charlotte and Bernadette do their own research and create mood boards separately. They sketch out a few ideas and then come together to mix and match and meld their concepts together as one. “My mom had never sketched before,” Charlotte said with a laugh. “I taught her how to draw!” While Charlotte’s designs tend to focus on a younger clientele with slinkier silhouettes and fabrics, Bernadette appeals to a woman her own age, someone who’d rather wear a striking kimono dress than a slip. 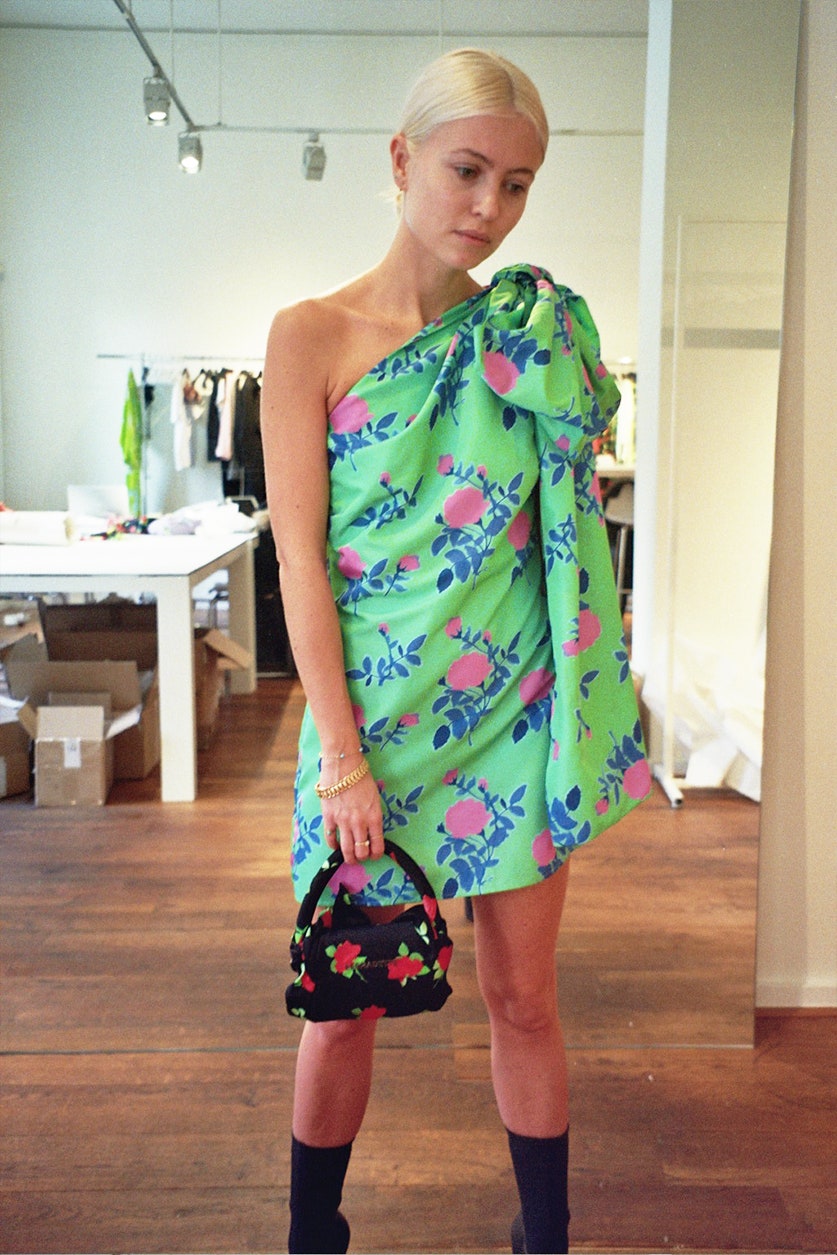 The women now have “an archive” of their past collections, of which there are five. Utilizing their prints and pops of color from the last year, they’ve begun the process of developing new silhouettes and fabrications outside of their signature silks, including taffeta and cotton poplin. “For spring we’ve made our very first suit,” Charlotte noted. “We are really trying to evolve our shapes, and we actually pulled a lot of inspiration from my mom’s closet, particularly her Ralph Lauren suits from the ’90s.” Indeed, Bernadette has a plethora of vintage at home, which she said includes “some dresses, but mostly blazers and suits. Surprisingly, I used to mainly wear suits and not so many dresses, though I do have great vintage dresses as well.” She added, “When I was younger I was really inspired by movie stars like Grace Kelly and Audrey Hepburn, and I am still looking at those references as we design today.”

For a brand that launched itself off of a single concept—the floral-print silk dress—Bernadette certainly has the potential to continue to expand, even beyond bags and new silhouettes. That’s hard to do in this market, when the competition for niche fashion labels is immense and more and more brands are popping up online and on social media every day. But another thing that sets Bernadette apart is their mother-daughter dynamic and their unwavering support and encouragement of one another. They’ll have to grow a team soon, in order to keep up with production demands and their sellout rate on sites like Moda Operandi and Net-a-Porter. But for now, the De Geyters are content working as a two-woman team. “We’re not very scared of having a lot of work,” Charlotte says. “We like being hands-on and we like to do it all ourselves. But we know we do need a bit of help because everything is moving so quickly. We have a huge space now in Antwerp, so we’re very excited to build a family here.”