It’s a good thing that a picture is worth a thousand words, because Kim Jones would prefer to let his work, and taste, speak for itself. “I guess I seem quite outgoing, but actually I’m quite a shy person,” said the designer in a recent call. Reticence is but one point of commonality Jones has discovered with Monsieur Dior; a love of nature and art are two more.

Before Christian Dior became a couturier, he was a gallerist. Now Jones is following in his footsteps, having been chosen to participate in Sotheby’s Contemporary Curated sale in New York by making a selection of his favorite pieces from among all of the lots. Think of it as a capsule exhibition within a larger one—and a chance to look at art through the discerning designer’s eyes. Vogue is the first to reveal the pieces Jones settled on, which range from an Alexander Calder brooch from 1938 to Nick Cave’s Hustle Coat of 2017.


Though this is a treasure-filled auction, Jones didn’t agonize over his picks. “I was quite focused,“ he explains. “I’m quite fast when I make decisions about things like that. It’s the same as when I’m working doing a collection, I guess. I pulled out things I loved, and the things that spoke to me, and the things that related to what I do with my job at Dior.” Asked which are the “most Dior” of his selects, Jones singles out pieces by Raymond Pettibon and KAWS, artist he’s worked with. They share space with work by other artists the designer admires, as well as new discoveries. “I’m very instinctive the way I choose stuff,” says Jones. “I purely choose things because I love them, not because it’d be cool or anything. It’s just things that speak to me.” 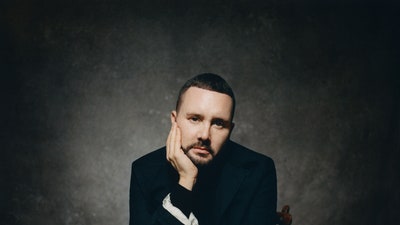 What started the conversation between the auction house and the Dior Men designer, explains Charlotte Van Dercook, Head of Sotheby’s Contemporary Curated auctions in New York, was observing how Jones collaborates with important contemporary artists in a way that speaks to a younger generation (to which these sales are also aimed).

Jones himself is a collector, with catholic tastes that range from pre-war paintings to first edition books to archival fashions by Vivienne Westwood and Leigh Bowery. His criteria for selecting artwork is straightforward; he looks for “things that I find I can live with at home, things that feel like they belong in the building so to speak.” As that building, Jones’s house, is made of “concrete, glass and metal” he looks for things that “warm it up a bit.” He finds pieces by the Bloomsbury group do that quite nicely. In a glass-ceilinged garden room, hand-painted de Gournay wallpaper does the trick.

Warmth, connection, home: These are things that can’t (easily) be found online. Jones, who makes it a point to look away from his phone and take in his surroundings, observes Gen Zers doing the same. “People are going away from digital, more into analog research—especially kids under, say, 20—which I think is quite interesting,” says the designer. “They do a lot of research; they’ll go to a library and find things in books. I think that’s a really healthy thing to do. I think it’s just the natural thing of seeing the generation before them very, very digitally reliant, to then go back to something a bit more balanced.”

Then and now. Warm and cold. Masculine and feminine. These are some of the forces that Jones brings together in his often transcendent work for Dior Men. These are qualities that are also displayed in the designer’s selections for Sotheby’s Contemporary Curated, revealed for the first time. Pieces in the sale will be exhibited at Sotheby’s from February 28 to March 5, prior to the March 6 auction.

Posted by FASHIONmode News at 8:28 AM