This season, Coach creative director Stuart Vevers yet again drew inspiration from the 1980s. While the spring 2020 runway interpreted this theme more broadly, with T-shirts and tank tops featuring famous Richard Bernstein portraits of the likes of Rob Lowe, Michael J. Fox, and Barbra Streisand, this season Vevers narrowed his sights to New York City in the ’80s, focusing even more intently on one particular figure: painter Jean-Michel Basquiat.

Vevers rendered a selection of Basquiat’s paintings into prints that appeared on trench coats (like the one that Debbie Harry wore as she closed out the show with a performance of Blondie’s “Dreaming”) and boxy leather bags. Appropriately, he cited Downtown 81—the film in which Basquiat stars in, and which Harry makes a cameo as a bag lady in the end—as an enduring influence. But he also went beyond simply working with the estate of Jean-Michel Basquiat to get access to his paintings: Vevers enlisted Basquiat’s niece, New Jersey–based beauty entrepreneur Jessica Kelly, who runs the natural body-care line 4 the Love of All. “The four represents my daughter, myself, my mother, and my grandmother,” Kelly explained of her business’s name backstage following the show, seated next to her mother (and Jean-Michel’s sister), Lisane Basquiat.

Jean-Michel Basquiat had a singular sense of style, and Lisane confirms that he loved fashion. He walked in the spring 1987 Comme des Garçons runway show in Paris—his favorite CDG piece, a black overcoat, went on auction a few years ago and was expected to pull in close to $20,000. As for Basquiat’s everyday personal style, Lisane notes that he’d wear suits while working on his artwork, which would often result in paint-splattered tailoring. Kelly says that the beige leather trench coat (the one that Harry wore) feels, to her, most similar to the types of silhouettes he favored. “He just loved fashion. He wore it really, really well,” Lisane says. “I think he’d be thrilled about this.”

Kelly had done some modeling before in terms of photo shoots, but this show was her first official runway experience. “I can’t even call it overwhelming, because I think that I handled it pretty well,” she says, suppressing a giggle—but it’s undeniably the truth. Kelly looked as poised as the most seasoned runway models as she debuted new Coach sneakers, beige socks, a gray knee-length skirt cinched with a bow along the waist, and a leather cream button-down, all of which was topped off with a burgundy trench coat. She almost cried as she looked back at all of her uncle’s artwork on the pieces before the models walked out. 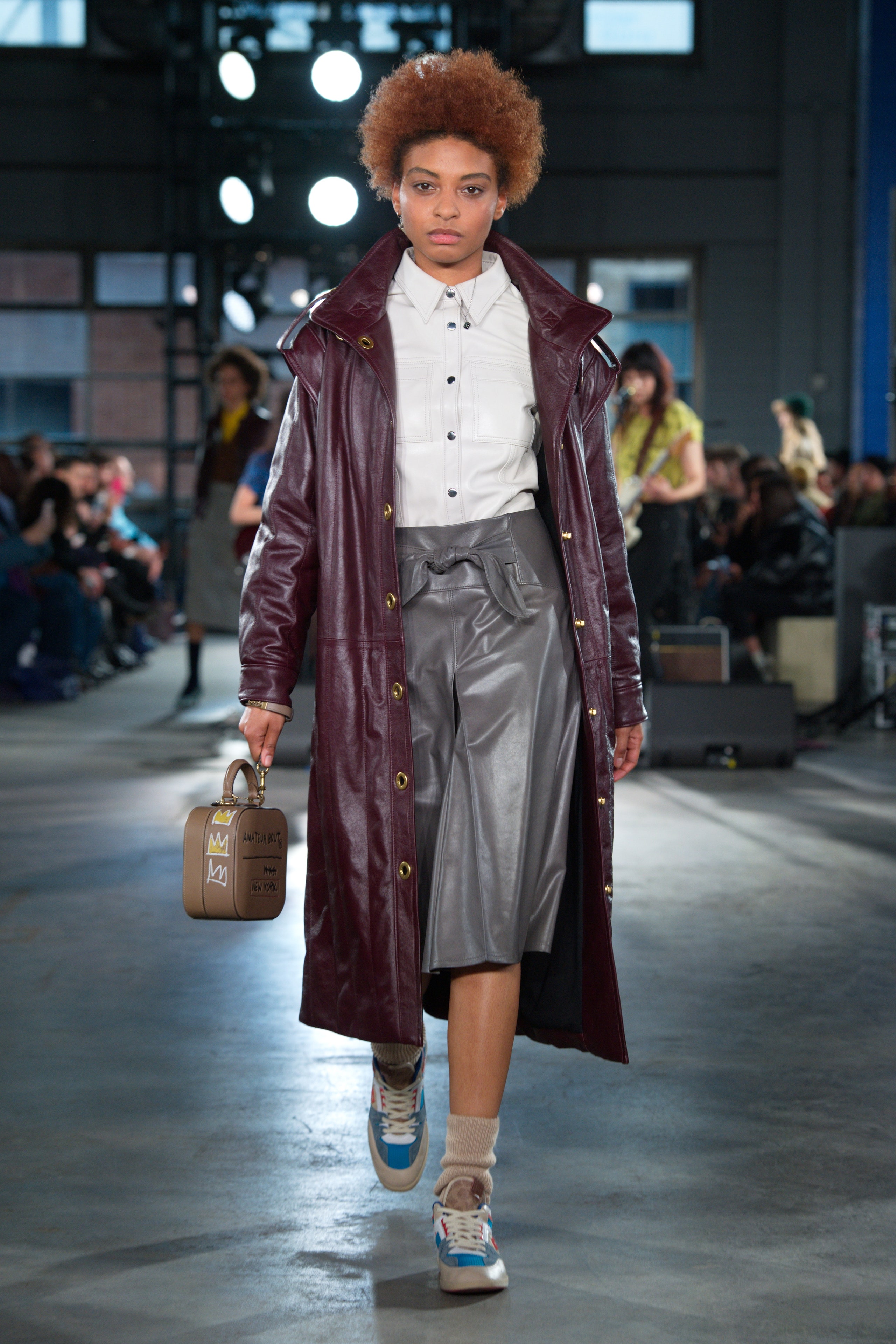 The bag that Kelly carried down the runway proved the most eye-catching element of her outfit, though: a petite brown leather handbag embellished with Basquiat’s signature crown motifs and a work by the artist from 1980 called Untitled (Car Crash). “I’m assuming it represents the time that Jean-Michel got hit by a car when he was seven years old,” Lisane says of that particular artwork. “It’s a beautiful work, and it’s absolutely beautiful on that bag. It just feels surreal to see my daughter walking a show wearing something branded with Jean-Michel’s work on it. It’s just incredible.”

Kelly had never met her uncle—he died before she was born—but she remembers the first time that the extent of his looming cultural legacy really set in for her. When she was in the sixth grade, Kelly, dressed in a Basquiat-modified hoodie, went to art class. “My teacher flipped out. ‘Where did you get that? That’s so cool. That’s my favorite artist.’ ” To Kelly, though, she knew Jean-Michel mostly through stories passed down from her mother and other family members. “The stories weren’t about art—they were about him pranking people and doing things like that, just really normal things at home,” Kelly says.