How A Bedazzled Folding Chair Became The Talk Of NYFW

When showgoers made their way to their standard bench seat assignments at the autumn/winter 2020 Area show this past weekend at the Africa Center, they passed a leaning tower of folding chairs. But rather than your average grey metal version, these were bedazzled, with crystals applied to every inch. Another variation came wrapped in zebra-print fabric; a third, in lime green.

There were tiny round-seated incarnations slathered in red gemstones, while yet another type acted as the most impractical of carryalls: a tiny, glitzy chair strapped around the body as if it were a bag. Another model wore a single chair earring.

All of these iterations were dreamed up by interior designers Harry Nuriev and Tyler Billinger, who collaborated with Area’s Beckett Fogg and Piotrek Panszczyk. Nuriev is the creative director of the design agency Crosby Studios, and the mind behind the couch made of Balenciaga clothing discards that appeared at Design Miami this past November. Myreality is a luxury label by Nuriev and Billinger, who spent several years working at Jeremy Scott and Moschino. Their collaboration with Area marks the launch of Myreality in the United States. 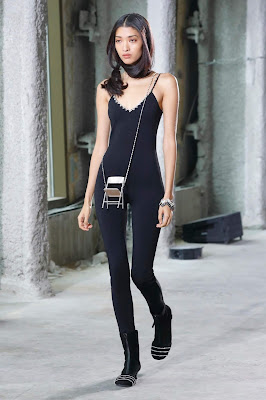 Nuriev and Billinger had long wanted to collaborate with the label after being inspired by its runway sets, which have included a pool and a metro station. “We met with the Area team and we were thinking about doing an interior project, and it evolved from there,” says Billinger. “We thought that they have such an eye for interior spaces, and that this [working with Area] could be a really cool fit for us. I spoke with Harry and we thought that we should do chairs, because of our interior background.” As for Fogg and Panszczyk, the idea clicked when they noticed Billinger’s wood-print parka from Myreality. Coincidentally, Fogg and Panszczyk were also developing a herringbone parquet floor print at the time, so they decided to do something. “It was mega-random,” says Panszczyk.

Nuriev and Billinger, who try to make their pieces as upcycled and as sustainable as possible, noticed the U-line-purchased folding chairs in Area’s studio and decided to work with those. “We knew that we could make an installation out of chairs,” says Billinger. “Harry was like, ‘If you have extra fabric, we can use extra elements of the collection and the dresses and translate it to chairs.’ It evolved to one chair, to several chairs, and then to stacked chairs.” The duo used leftovers from Area’s prior collections, including crystals and zebra print. “It is things from their studio that we gave a second life,” says Billinger.

And as for those itty-bitty, very viral chair earrings and non-bag bags? It was Myreality’s tongue-in-cheek nod to the mini bag. “I was like, ‘Want to do the biggest fuck-you to the mini bag?’” says Billinger. “The chair is a bag that is an accessory. You can put a coin in it, but [otherwise] there is nothing going in there, which is what I’m obsessed with.” We’ll take a seat now.

Posted by FASHIONmode News at 6:21 PM