9,000 km away from Milan Fashion Week, Lucky Blue Smith held his own stylish event on Friday, marrying girlfriend and fellow IMG model Nara Pellman in an intimate ceremony on the beach in California. Smith, fittingly, wore a sky-blue suit with royal-blue lapels and tie for the casual affair – which saw bride, groom and guests go barefoot – while Pellman chose a backless, ruched Orseund Iris maxi dress in ivory satin and carried a bouquet of white roses. Friends and family joined the newlyweds for celebrations that included dancing on the beach to Etta James, digging into a towering stack of sprinkle-covered doughnuts in lieu of a cake, and going on a late-night run to In-N-Out Burger. 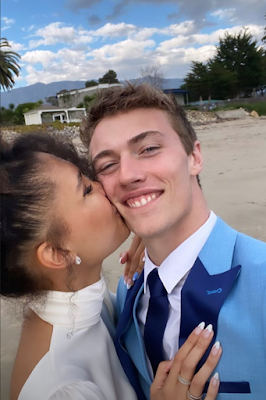 “I married my best friend today,” Smith posted alongside an image of himself kissing Pellman in the grass, with Pellman echoing the sentiment on her own page: “The boy who stole my heart…” The pair confirmed their relationship in November last year, and became engaged just a month later. Pellman shared a closer look at her ring, which features an oval-cut diamond and pavé band, on Instagram a few days before the nuptials. “Pinky promise,” she captioned the shot of her hand intertwined with Smith’s.

Smith famously made his modelling debut in Vogue Homme Japan along with his siblings at just 12 years old, photographed by none other than Hedi Slimane, and has been a regular on catwalks ever since. He welcomed his first child, Gravity Blue Smith, with model Stormi Henley in 2017.

Posted by FASHIONmode News at 8:44 AM