As iPhones happily snapped the Hadid model dynasty on the Off-White autumn/winter 2020 runway, it was almost possible to miss two key new accessories within the seasonal edit. Virgil Abloh paired looks 13 and 14 – neutral takes on deconstructed tailoring – with a white and buttery version of the Off-White x Air Jordan 4 trainer. Big news for sneakerheads.

Ever the hype master, Abloh posted a picture of his take on the 1989-born, Tinker Hatfield-designed style prior to the presentation, with the caption: “Forever attempting to jump from the free throw line.” Like his previous collaborations with Nike, the shoes feature declarative Off-White insignia, including the word “AIR” in quotation marks on the sole and “SHOELACES” on the laces, plus the Jordan brand tag. 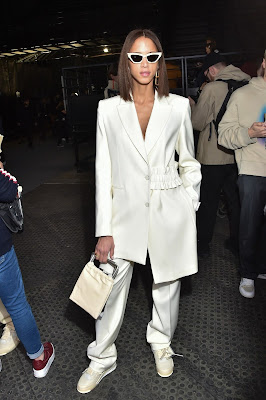 Off-White followers (the brand was once again named the most popular brand in the world for Q4, 2019) will remember that a black and red iteration of the Air Jordan 4 was premiered at the Virgil Abloh Figures of Speech exhibition at the Museum of Contemporary Art Chicago, Abloh’s hometown, in June.

The discreet drop within a grown-up autumn/winter 2020 collection – which saw Gigi and Bella Hadid model voluminous tulle ballgowns and Arc’teryx outdoor performance jackets – was also a surprise given that Abloh has only just released a coveted new Off-White x Air Jordan 5 remake. On 15 February, he released a black pair of 5s with a reflective silver tongue, circular window detailing, and his customary Off-White branding.

“It’s such an awesome industry that we have,” Abloh told British Vogue of his trajectory, which has seen him break down boundaries and ink major brand deals as a black man with no formal fashion training. “Little things [like trolls] don’t even begin to slow me down. Anyone who has changed the course of history has to have an unsettling feeling… because otherwise you’re just in the crowd. I have this longer view, which is completely fine.” Nike, it seems, will be part of this game plan, as the drops for Abloh’s cult trainers keep coming and the wait lists grow longer. While the 5s were made available in men’s sizes, the Jordan 4s could be a women’s exclusive. Expect Rihanna, Hailey Bieber and, of course, the Hadids to kick it in them first.

Posted by FASHIONmode News at 10:38 AM