“Riccardo is one of those people who you see for the first time in your life, but feel like you have known him forever,” British Vogue cover star Irina Shayk has said of her “real friendship” with Burberry’s chief creative officer. And so, at the British heritage brand’s autumn/winter 2020 show at London Fashion Week, Shayk was naturally among the coterie of top models flooding Tisci’s catwalk in Olympia National.

Kendall Jenner, Gigi and Bella Hadid, Joan Smalls, Fran Summers and Ugbad Abdi also circled the two grand pianos positioned back-to-back on the raised runway, as Yolanda Hadid, Cate Blanchett, Naomi Campbell and Winnie Harlow took in Tisci’s latest interpretations of the house tropes – including trenches and checks – from the sidelines within the Victorian glasshouse. It was Shayk, looking radiant thanks to her failsafe 24-carat gold face mask treatments, who modelled one of the most directional looks. The Russian beauty made a black patent mac worn over a hooded monochrome collared dress with a star motif on the chest look as if it was already in her wardrobe. 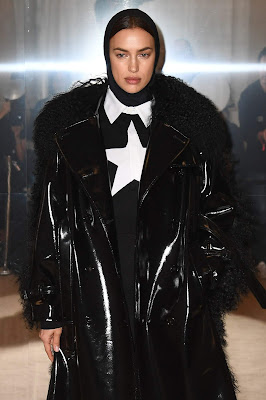 “With every collection, Riccardo is opening a new dimension of his creativity,” she told Vogue recently of why Burberry is a highlight of the seasonal show schedule for her. “He does not just design great clothes, he delivers a message out there. What I love about Burberry is that the show is always major, with incredible light and music, and I love how Riccardo brings diversity to the runway. It is very modern, chic, young, classy and cool at the same time. Every piece of the collection has a soul in it.”

Shayk’s autumn/winter 2020 look is a departure from the last Burberry look she was photographed wearing at the Vogue Fashion and Film party. Tisci created a crystal-embellished mesh gown worn over a fawn body suit for his friend, who he said, “perfectly represents my ideal of a woman filled with beauty, love and intelligence at the same time”.

“She wanted to look strong, sexy and feminine,” he continued. The same characteristics could be applied to his latest collection, proving, as ever, that this pair is a match made in fashion heaven.

Posted by FASHIONmode News at 10:17 AM