Balenciaga under creative director Demna Gvasalia casts an eerie image, teetering in between what is real and what is warped. Its latest campaign, released earlier this week, is presented as a fashion-infused newscast with a dystopian feel. (On Twitter, a version loops for 24 hours.) Newscasters are reminiscent of robots with glitchy marionette mouths. In the Gattaca-style world, all of which is outfitted by Balenciaga, the mood is apocalyptic and carefully calculated to be both familiar and unsettling.

One news item is about how traffic jams have been replaced by a stream of clone cars seamlessly tailgating each other at a rapid speed in full Human Centipede mode. Another story reports that the planets are aligning, causing some kind of eclipse that presents an opportunity to show off Balenciaga’s slender black sunglasses. Perhaps the most chilling part of the video loop is the meaningless ticker blips of info juxtaposed with headlines like “Where is all the water going?” The inane, incorrect factoids—a bevy of fake news, if you will—include: “Researchers match on Tinder in Antarctica,” “Rodents gnaw because their teeth never stop growing,” and the oddly deep-cutting line “One in a million isn’t that rare.”

The concept behind the newscast came from the Paris-based artist Will Benedict. His prior work floats in between reality and distorted fantasy. One of his videos includes Charlie Rose interviewing an alien. While most of the imagery from the Balenciaga campaign seems plucked out of a science fiction movie, much of it is based on actual images. “I try to find things that are very real, and very much a part of our very much real lived world,” says Benedict. “In the end, you don’t know where you are standing. I like that unstable kind of place.” At one point, there is a revolving whirlpool accompanied by the aforementioned question “Where is all the water going?” It is the largest drain hole in the world, the Monticello Dam Morning Glory Spillway in Napa Valley. 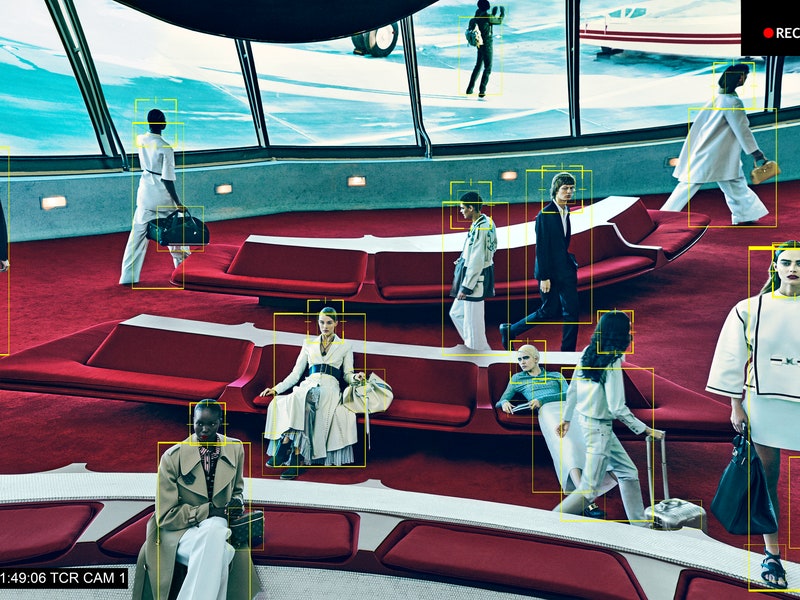 Other images include pedestrians, all in hulking Balenciaga coats, walking across the street, along with a plastic bag joyfully pacing next to them. “The plastic bag carries a lot of meaning right now. It is an object that carries our problems in it,” he says. “As soon as you activate a plastic bag as a thing, the idea that it could take care of itself, that it is sentient…is the part that would make people scratch their heads.” For Benedict, the idea of adding in these oddities makes for a Twilight Zone newscast that is more digestible than the actual news. “It is a funny job to figure out what will be the intent of the news report,” he says. “If you were to really do what was on the news you’d scare the shit out of people, so it can’t be as hard-core as the real news.”

Balenciaga is no stranger to tinkering real life into a semi-nightmare. (For the spring 2020 collection, the house sent out models with cheek and lip prosthetics, a seeming nod to the culture of exaggerated social media filters, which have now been mirrored in plastic surgery.) To create an authentic but off-kilter world, Balenciaga has a history of using non-fashion photographers. The fictional politicians in the video were captured by Laurence Chaperon, who has photographed real-life politicians such as the German chancellor Angela Merkel. In spring 2018, Balenciaga tapped the paparazzi to shoot its paparazzi-themed campaign, while using the portrait photographer for the portrait-themed spring 2018 men’s campaign. In other words, it’s Balenciaga’s world and we’re just living in it.

Posted by FASHIONmode News at 7:49 AM