Let’s address the elephant in the show venue: the fact that Tom Ford is the newly installed chairman of the CFDA, the body in charge of New York Fashion Week, but has decided to up sticks to show in Los Angeles has raised more than a few eyebrows. In Ford’s defence, he isn’t alone. Several of the blockbuster US brands are missing from the schedule, including Ralph Lauren and Tommy Hilfiger. He would argue, too, that part of his role as chairman is to bring global attention to American fashion – and right now, all eyes are on LA. It’s Oscars weekend. Everyone is here. Why not capitalise on all that star power with a catwalk show that was a concerted play for red-carpet exposure – see all those crystal-strewn gowns – as well as for the tracksuit-clad morning after? Here’s everything you need to know about Tom Ford’s autumn/winter 2020 show.

Star Gazing Fanatics Were Satiated With A Front Row To Thrill 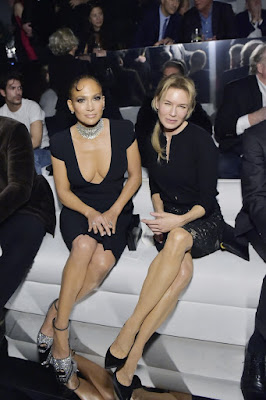 It’s In The Jeans 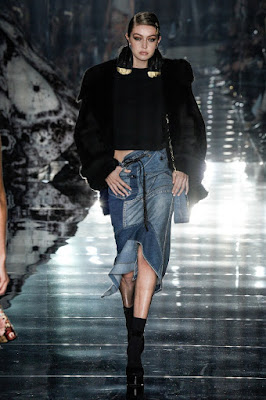 Good news if you’ve already invested in runway denim: spring’s reignited love affair with the stuff continues to burn bright into autumn. Tom Ford has always had a talent for elevating the workaday cloth – remember those jeans he made for Gucci, for spring/summer 1999, where the bottoms were bedecked with feathers? Tonight his emphasis, he said, was on denim “worn as fashion pieces and not just as ‘jeans’.” The key cut was a flared shape crafted in patchwork that proved to be one of the big takeaways alongside midi skirts made from fabric that had been distressed, cut apart and reassembled. Equally covetable were the matching denim ’80s purses with gold chain straps. Consider it the new double denim.

Coachella Style Got A Reboot 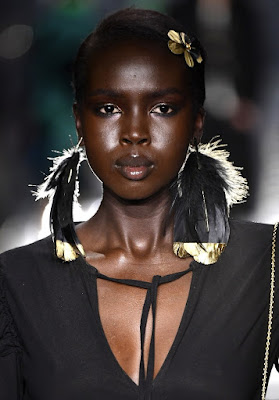 Tom Ford’s wafting tie-dye kaftans in orange, and another in black and white artisanal swirls, took off on the runway like gently deflating parachutes. Coupled with those gold-dipped feather earrings there was an air of Coachella about it all (albeit one that’s reassuringly expensive) which felt right at home here in California. Ford had been inspired, he said in a press release, by a photograph taken by Bob Richardson in 1967 for Vogue Paris. “The picture is one of my favourites and [...] is of Baron Alexis De Waldner and Donna Mitchell. Alexis is holding a cigarette [or a joint] up to Donna’s mouth and her eyes are closed in a relaxed and sensual way. I love this image and its slightly louche mood. Chic, possibly slightly stoned, and very sensual. Bob lived in LA for part of this period of his life and while I am not sure where the image was actually taken, for me it conveys the mood of the season and a mood that for me is very LA.”

Off-Duty Sportswear Got An Airing, Too 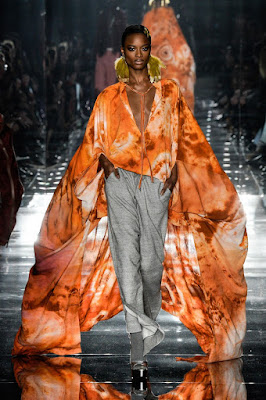 The idea of ease and a luxurious take on sportswear has been interesting Ford of late. Last season, it was T-shirts teamed with full ball gown skirts; this season’s winners were sweatshirts with the sleeves hacked off and jersey grey marl track pants with drawstring waists and slit hems. If that sounds a bit down-and-out, it wasn’t. How could it be, when the Tom Ford label is sewn on the outside for all to see? 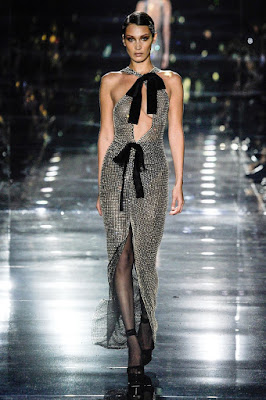 Tom Ford is a brand that has red-carpet contender sewn into its seams (who could forget Zendaya at the Critics’ Choice Awards in January wearing that turbo hot pink, breast-plated number?). Eveningwear is his forte – indeed, he revealed “I love designing evening clothes. I have more evening clothes in my own closet than day clothes” – and if one of tonight’s sensational finale gowns doesn’t make its way onto an A-lister come Sunday, then someone somewhere isn’t doing their job right. It’s only two more sleeps until the Academy Awards, but there’s still time to snatch one. Jennifer Lopez and Renée Zellweger looked particularly taken with a few: from the opening halter-neck, crystal-strewn gown, slashed open diagonally across the front and seemingly attached to the body with little more than two velvet bows, to a black lace glorified “kaftan”, the options were resolutely sexy.

On that note, Ford had been musing about sex appeal, stating, “today, I find my work to be more sensual than sexual.” He continued: “I have often been asked why I am always designing clothes that make people ‘sexy’. The truth is that I don’t actually start out with that as my goal when designing, but I find the human body beautiful and I naturally, and without thinking, tend to cut clothes that accentuate and enhance its form. Thus my clothes are by nature sensual. And at times sexual. At least I hope that they are.”