Could This Playful ’90s Accessory Be Poised For A Comeback?

Traditionally, It bags have been the status item to carry around New York Fashion Week – and that’s certainly been the case this past week. Street-style stars moved from one show to the next carrying the latest designer handbags. (Bottega Veneta bags were a particular favourite.) However, stars such as Rihanna, Bella Hadid, and more rocked novelty hats, particularly faux-fur styles that took cues from the ’90s. It’s official: say goodbye to the status bag, and hello to the statement chapeau.

The throwback hat trend was first spotted on Rihanna. A day after hosting a party for her new Fenty collection, the business mogul was seen hitting the streets in a green faux-fur topper by Emma Brewin, which she paired with a Metallica tee and jeans. It was a whole lot of hat to pull off, but her trainers dressed down the ensemble and made the accessory feel totally effortless. 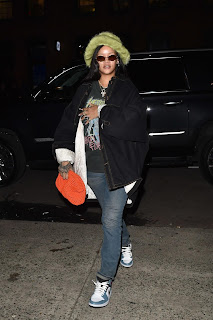 The surprising look even made its way to the red carpet this week. On the other side of the pond, FKA Twigs attended the NME Awards in London this week: she hit the green carpet in a huge, wide-brimmed Benny Andallo faux-fur hat by a self-described “silly crown designer” in London who makes crazy hats. The colourful style was similar in hue to Rihanna’s, though she styled it in her typically offbeat, FKA way with a lace-trimmed pinstripe coat and wide-leg trousers, which were both vintage Jean Paul Gaultier pieces from her own collection. Clearly a theatrical hat looks good on just about anyone. If that’s not an investment piece, what is?