Why The Christian Louboutin Exhibition In Paris Is A Must-See

From February 26th to July 26th 2020, head to the Palais de la Porte Dorée in Paris to see an exhibition dedicated to the world-renowned luxury shoemaker, Christian Louboutin. A key figure in the world of fashion, the exhibition will offer a journey through more than thirty years of creation in about ten chapters. "This exhibition showcases the precious relationships that have marked my journey, through working with craftsmen who possess unique expertise as well as collaborations with artists who are dear to me," Louboutin commented in a statement. This unmissable fashion event retraces the designer's journey, from his earliest youth to the highlights of his career, through his most beautiful encounters.

Audacious, inspired, and open-minded are all fitting adjectives for Christian Louboutin’s accomplished career… Remarkably, the Parisian shoe designer has been creating sketches of his designs since he was 12 years old, the first of which was inspired by the architectural beauty of the Palais de la Porte Dorée. On February 25th, 2020, in the very same place that inspired the young designer, an exhibition will open honoring the designer’s career and his larger-than-life imagination. 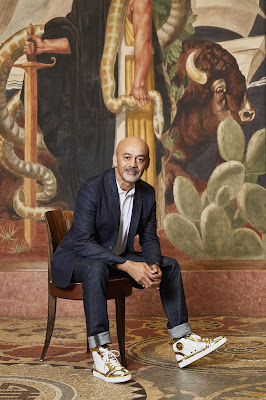 Following a path dreamed up by Olivier Gabet, curator of the exhibition and director of the Museum of Decorative Arts, visitors are invited to discover the inspirations behind the designer to whom we owe the iconic red sole. “Where ever I go, there is always a garden to see, or a museum, a church, a concert, some element of architectural design. The main tool I use to stay inspired is open-mindedness, I try to go where others won’t.” What to expect? A showcase of the designer’s most prized shoes, some from his personal collection, and a look at exclusive collaborations, some of which have never been shown before.

As a testament to Christian Louboutin’s dedication to craftsmanship, some of the pieces reveal exclusive stained glass creations by the Maison du Vitrail, silver Sevillian palanquin, and a cabaret carved in Bhutan. In addition, the exhibit will feature original collaborative projects between the designer and some of his favorite artists. These collaborations include projects with director and photographer David Lynch, the New Zealand multimedia artist Lisa Reihana, the English designer duo Whitaker Malem, the Spanish choreographer Blanca Li, the Pakistani artist Imran Qureshi, and a host of others…In short, this exhibition marks a new sense of excitement for the Palais de la Porte Dorée, it’s not to be missed under any circumstances.

Posted by FASHIONmode News at 8:22 AM