What Rosh Mahtani has achieved in the six short years since she founded her brand, Alighieri, is nothing short of remarkable. Almost single-handedly she – and her remarkable team – have revitalised London’s jewellery industry, injecting a fresh wave of energy into the storied streets of Hatton Garden. Ever since the 19th century, the area has played host to jewellers, its cobbled streets sitting atop labyrinthine tunnels linking vaults to workshops, and it’s here that her internationally renowned business has been built.

“We make everything within these six streets, and this is our home in so many ways,” said Mahtani. “It’s such an honour to be able to [work] here – ever since I first stumbled into my caster’s workshop with a little broken and textured wax mould that I’d made myself. They didn’t laugh in my face – even though that little crustacean [I showed them] had two legs missing. They said, ‘Let’s see if it works.’ And they have been supporting me ever since. It’s thanks to them we’ve managed to build this.”

Accordingly, it was here she chose to invite the fashion industry to celebrate her winning the Queen Elizabeth II Award for British Design, presented by HRH Princess Anne: just a few roads away from her headquarters, and two from where her casters work. So, on the final day of London Fashion Week, the Princess Royal and editors from across the globe made their way to St Etheldreda’s Crypt: in the oldest Roman Catholic church in England, a space which has played host to everyone from King Henry VIII (one of his many wedding feasts was held there) to Sir Christopher Hatton.

To the ghostly sounds and ethereal voices of drone choir NYX, a series of models dressed in Baserange lingerie and the glittering pieces that have earned Alighieri such a devoted fanbase meandered within its stone walls, navigating between statues draped in her new collection of designs and walls of yarrow flowers. 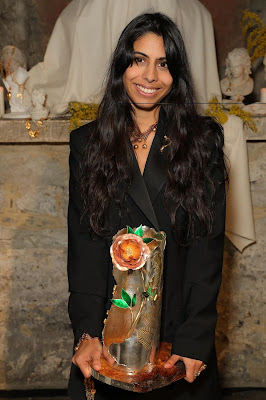 A group of models representing a broad range of ages who gently interacted with one another aptly reflected the spirit Alighieri has been devoted to ever since its inception: one that is determined to connect people through intimately conceived, hand-cast talismans.

“We’re talking about connection a lot this season; how we can be close to each other in so many ways, yet feel completely disconnected,” Mahtani told British Vogue last week. “[I wanted to] use these links to highlight the fact that our ability to communicate with each other and create meaningful dialogue is the key to how we’re going to move forward as a society. Politics is distressing, the environment is distressing; we should be supporting each other through that.”

The Queen Elizabeth II Award for British Design was conceived as an initiative not only to celebrate those with exceptional talent and originality, but equally those who possess strong community values and sustainable practices – and Mahtani’s dedication to local production and manufacturing, alongside a traceable supply chain, is a prime example of that spirit.

“Each year this award had gone to a slightly different part of the fashion world,” said Princess Anne, referring to Mahtani’s predecessors, Richard Quinn and Bethany Williams. “It’s entirely appropriate that we not forget jewellery as part of that... So I’m delighted that jewellery has made it to this award, and particularly… a young individual who has found her own way of getting her own creations, her own interests in jewellery, right to the forefront of the market.” We couldn’t have said it better ourselves.

Posted by FASHIONmode News at 7:56 AM