Is Streetwear On The Verge Of Extinction?

Is it time for the end of the streetwear reign? What trend will be taking its place? Here is the answer. “I would definitely say it’s gonna die, you know? Like, its time will be up. In my mind, how many more t-shirts can we own, how many more hoodies, how many sneakers?" It was with these words published in Dazed & Confused Magazine that Virgil Abloh created a media tidal wave in December 2019, a month before his Louis Vuitton and Off-White Men's Fall/Winter 2020-2021 shows. With this statement, does the designer want to shake things up and make people react? Let's find out.

Thanks to brands like Aries, Palace and Union NYC, streetwear and its subcultures have made their way to the forefront of the fashion scene, and have become intrinsic to its history. One label in particular has been shining in this vein for many years: Supreme. James Jebbia, its founder, knew exactly how to make a superbrand by creating limited editions, intense branding and an iconic bold logo. The hype of Supreme remained reserved for a circle of insiders for about two decades, before spreading with a bang, just like Stüssy, to a wider audience with the help of social media. Having become a real cult and even the object of a sociological analysis, giving rise to several books and viral documentaries, the brand excels at creating desire among “kids” by offering the feeling of belonging to an elite straight off the streets, an idea that comes straight from the founder. The Supreme branded pieces, recognizable by their vibrant red color, create excitement and wonder as a tribute to cool. More than just a trend, streetwear has become a real state of mind and luxury houses have understood this.

We have to go back to 2017 to fully understand the craze and the impact that streetwear had on the whole fashion and luxury industry. For the Louis Vuitton Fall/Winter 2017-2018 show, then under the artistic direction of Kim Jones, the house unveiled a men's fashion show that created a huge buzz because of the surprise collaboration between the French trunk maker and the streetwear titan Supreme. And for good reason, it was the first time that a luxury house had lent their know-how of their famous workshops to a street brand to create a collection of ready-to-wear and accessories.

Since then, luxury houses have been using street brands as one of their spearheads, like Dior who, for their pre-fall collection presented in Miami, showed their collaborations with Shawn Stussy and Jordan Brand on the runway. For the collection, a pair of Air Jordan I High OG Dior sneakers was born in Italian leather that merged the logos of the two brands. Another great example is Balenciaga who, since Demna Gvasalia took over as creative director, breathes an underground twist into their collections, despite not undertaking collaborations often. The brand features oversized puffer jackets, coats with dramatized shoulders and military thigh boots which shows how the designer reinterprets the archives in a luxury version but also inspired by the street creating a new aesthetic of which is exclusive to Gvasalia and Balenciaga. 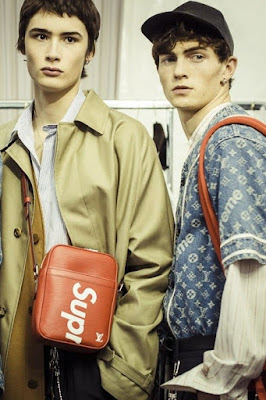 Sneakers are now a popular choice everywhere: in the world of sport of course, but also in the workplace where they can be found on the feet of pretty much every outfit. This piece of sportwear has contributed to the streetwear boom. Houses have taken on sneakers and completely reinvented them by infusing them with normcore inflections, screaming logos and intriguing details.

On the luxury side, Balenciaga remains the master in creating the it-sneakers of each seasons. For example, the Triple S sneakers (those 1990s UFO style sneakers spotted on the Fall/Winter 2017-2018 runway) are now spotted all over the world. In fact, the house (with Demna Gvasalia at the helm) ranks fourth behind Off-White, Nike and Alexander McQueen in the ranking of the most coveted sneaker brands in 2019 according to Stylight with men paying an average of 302 euros for a pair of designer sneakers according to the same report.

Several houses rich in heritage and know-how have decided to rely on designers with a street background: Virgil Abloh at Louis Vuitton mens, Kim Jones at Dior Men, Demna Gvasalia at Balenciaga. All of which is enough to surf along the trend that sells. However, during the last Men's Fashion Week Fall/Winter 2020-2021, we saw a real return to the roots of menswear.

Was Virgil Abloh's prediction true? For his latest Louis Vuitton show, we said goodbye to oversized hoodies and UFO style sneakers. This season, the multidisciplinary designer plunged into the archives of the French trunk maker, getting out of his comfort zone as he took to the opposite style to streetwear by looking at traditional mens dress. The result was a plethora of classically elegant models highlighted with innovative details including half a patchwork vest over a tailored jacket, pieces made entirely of cut-outs for a deconstructed style, a shirt and tie sewn directly onto a coat along with a total leather look which was full of elegance.

Right now, it is impossible to say if streetwear is dead. Although it is no longer at the centre of designers' inspirations, it remains present and infused in just the right dose either subtly reinterpreted or completely metamorphosed through clothes with a more classic style. While we are witnessing a strong comeback of tailoring, with well-tailored suits, oversized coats and ties sneaking into collections, streetwear has been a springboard that has allowed luxury houses to make their way into the wardrobes of millennials but has also broken down boundaries between luxury houses and the customer.

Posted by FASHIONmode News at 5:15 PM