A decade after his death, Lee Alexander McQueen’s name has been immortalised as one of Britain’s most daring creative forces, the fashion house he founded in 1992 instantly recognisable around the world for its ornate gowns, sculptural tailoring and blockbuster accessories. Yet few outside the cloistered fashion and art worlds are equally familiar with the Sarabande Foundation – arguably McQueen’s greatest legacy.

The charitable foundation is a lifeline for emerging creatives. Since it opened, in 2015, Sarabande has supported 85 artists and designers. By the end of 2020, that number will reach 100. Offering educational scholarships and, more significantly, substantially subsidised studio spaces to emerging designers, artists, sculptors and craftspeople at its converted warehouse in Haggerston, east London, it is just a handful of Overground train stops along from Stratford, where McQueen himself grew up on a council estate.

Sarabande came about when a group of McQueen acolytes were determined to come together to create something positive at a time of painful loss. “We were all knocked sideways when [Lee] took his own life,” says the photographer Nick Knight, who has been involved from the start, along with the fashion critic Tim Blanks, Naomi Campbell, the curator Andrew Bolton, the artist Sam Taylor-Johnson and the jeweller Shaun Leane. “We were trying to find solace through each other. Anything that was a communal activity for friends and acquaintances of Lee’s helped a little bit, in a cathartic way, of sharing the pain of losing someone so close in such a horrible way. Sarabande was a way of finding something positive in a situation that was heart-breaking and devastating.”

“What they do is support young artists and designers in a very real way,” says Craig Green, who was the first designer to be given a studio at Sarabande. Though he may now be one of London’s menswear frontrunners, having staged his debut show in Paris last month, at the time Green was unable to afford a creative space in which to work. “To find a studio space that is secure, safe, insulated, heated, [and] has functioning toilets is quite rare in London,” he adds. “The rent we pay now is relatively 12 times the amount we were paying at Sarabande.” 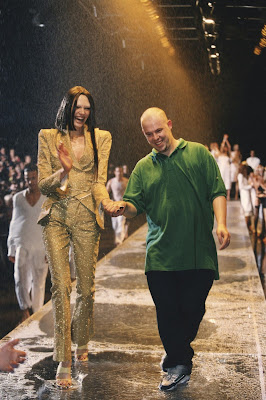 By comparison, Sarabande’s rent is £1 per square foot per month, seven times below the average market price (bills and Wi-Fi included). This also comes with mentoring from its board of patrons – whether that be in terms of the logistics of how to grow a business, or just being on the other end of the phone.

McQueen, whose own education at Central Saint Martins had been made possible by a gift from his Auntie Renée, knew too well the uphill struggle of establishing oneself as a creative force without any governmental funding or parental support. In the nascent years of his eponymous label, he was on the dole. Upon his death, in 2010, his will revealed he had bequeathed millions to help others get off to a better start than he did. “There are a lots of kids out there who absolutely deserve and need scholarships,” says Knight. “Some people are desperately poor in a way that is perhaps quite shocking in this day and age and have to do all manner of things [to get by] at all, let alone to fund themselves through an arts education.”

Craig Green is the perfect example. At the time of moving in, the designer had just one person working with him, with no money for a studio or to make his collections. During his time at Sarabande, with the support and advice of its patrons, his team grew to seven and his business grew 200 per cent. Meanwhile, he took home two Fashion Awards. “Perhaps the biggest asset is the unbiased advice,” he explains. “They introduced us to factories and suppliers, gave us advice on how to build a commercial collection, helped us with legal and financial advice and contracts. It gave us the encouragement and support to build a business. You get the feeling they just want the best for the people who are working in the foundation.”

“They” is mainly Trino Verkade, the flame-haired woman responsible for the daily running of Sarabande. As McQueen’s first ever employee, she juggled many roles as the designer morphed into a global brand, before joining Thom Browne as executive vice president in 2012, and, later, Mary Katrantzou as CEO. Having seen fledgling London businesses at every stage, from driving McQueen’s samples to his shows in the early ’90s, to its investment from Gucci Group (now Kering), to Mary Katrantzou’s coming-of-age as an independent luxury brand, there is no one better placed to advise young creatives on making it in the arts. 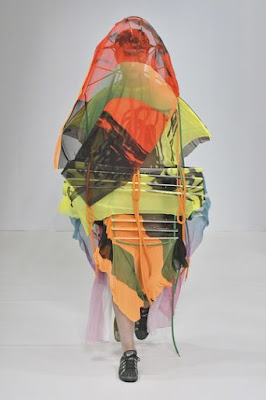 In 2007, McQueen named Verkade as a trustee at the foundation, and she was charged with a plan to establish Sarabande. Upon finding the warehouse, she enlisted the architect William Russell to transform the 9,200 square-foot space into offices, a large gallery area and 12 studios. Today, the building is scattered with pieces from McQueen’s vast art and furniture collection, as well as those by past and present residents. It’s a reminder of the man who made it all possible.

“Time is something that has been stolen from a young artist or designer’s journey, with the pressure to make money in a changing industry,” says Verkade. “The costs of starting a fashion business are extremely high, and the operations are much more complicated, expectations on delivery and marketing can be exhausting, and the desire for something new to present to the consumer leaves little time to develop a meaningful product or collections.”

“When commerce is on a downwards spiral it’s paramount that people work together rather than being separatists,” says John Alexander Skelton, the menswear designer who moved into the studios after a spell making his textile-focused collections in his south London houseshare. As with many of the creatives in residence, the whole building was available for use, and when Skelton had no budget to stage a show in 2017, he was able to do so in the gallery space. “They allowed me full creative freedom, which is very rare, and I was able to fully transform the building over a two-week period. I can’t think of anywhere else this would be possible.”

Many of the residents are encouraged to return for advice even once they move on: Craig Green has since used the space for showroom appointments and even gatecrashes the annual Christmas party with his team, while Skelton regularly turns to Verkade for business advice. Today, Sarabande is home to some of the next generation of designers and artists, including Stefan Cooke, animator Isabel Garrett, painter Stephen Doherty, shoe designer Jimmy Junichi Sugiura, engraver Castro Smith and sculptor Joshua Beaty. And they’re all encouraged to collaborate with each other. 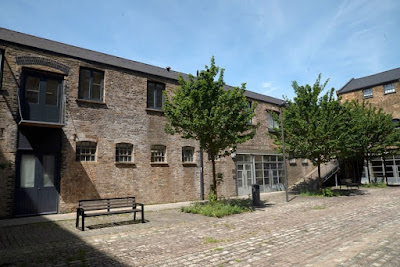 During her two years there (minimum studio leases are one year, with the possibility of a second) designer Katie Roberts-Wood found the community of creative neighbours a resource for her own creativity. “It’s not just a fashion thing,” she says. “That multidisciplinary environment is not only much more interesting – it’s one of the most valuable assets of being there.” Not only did she cast several of her co-residents in her shows, but found a kindred spirit in the prosthetic artist Kristina Walsh, with whom she ended up collaborating. “I would never have come across someone like that, even when I was at the Royal College of Art,” she points out. “In terms of everyone being together in close quarters, you learn from each other.”

Sarabande also holds around 50 talks each year, which are open to the public and streamed online. Previous speakers have included Maggi Hambling, Andrew Bolton, Tim Walker, Molly Goddard, Jake Chapman and even Eddie Redmayne in conversation with Colleen Atwood. Some are more practical – workshops explaining tax, exports, contracts, distribution, and working with galleries. The Foundation also helps set up fitting commercial collaborations for its tenants, giving them an income and exposure in the process.

At the centre of it all is the legacy of McQueen that extends far beyond his unforgettable designs and groundbreaking shows, which have now enthralled thousands at museums all over the world. Though he may be widely remembered as a singular creative force, his generosity has ensured the survival of a new generation of creative spirits in the city he called home.

All products featured on the website are independently selected by our Editors. However, when you buy something through our retail links, we may earn an affiliate commission.

Posted by FASHIONmode News at 6:34 PM