If you take as your theme “the intersection of chaos and form”, who better than Miley Cyrus to make a guest appearance at your New York Fashion Week Show? Marc Jacobs invited the singer to walk his catwalk at the Park Avenue Armory on 12th February, wearing a black bralet, tailored black trousers, a crystal collar necklace and dragging a zebra-print coat, and Cyrus willingly obliged. She captioned one Instagram post showing a video of her walking with the word, “included”, and a second with the phrase “genius design and execution.”

Cyrus has previously referred to Jacobs as her “fashion mentor”. In 2013, she gave an interview in which she discussed how the designer had “brought me into fashion...when I was 16.” She continued: “[My look] has to be sexy and strong and that’s what I feel like with fashion, I feel like Marc does that so well. There’s definitely something amazing about being so lady-like yet being so punk.” 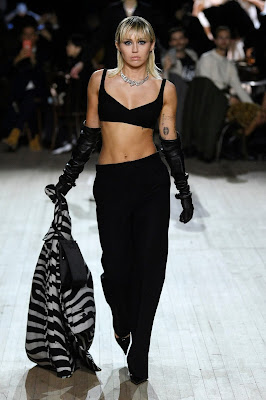 The two teamed up last year to release a sweatshirt, with all proceeds going to Planned Parenthood. The memorable imagery captured Cyrus licking a cake iced with the words, “Abortion Is Healthcare”. In 2016 they collaborated on a limited series of portraits by the New York-based artist Marilyn Minter, which made thousands of dollars for the women’s healthcare organisation.

Miley is no stranger to the catwalk, having previously walked at New York Fashion Week for Jeremy Scott. And the singer had the modelling seal of approval: Naomi Campbell posted hearts underneath her feed.

Posted by FASHIONmode News at 8:24 AM