Queen of the ballet flat, Alexa Chung is doing the press rounds for her new Netflix show, Next in Fashion, and she’s souped up her footwear for the occasion. At the AOL Build Speaker series, which seems to be a right of passage for anyone promoting projects in New York City - she wore tonal ’70´s inspired co-ords and Vivetta pumps so good they’d make you stop in your tracks.

Borrowed from stylist Rachel Bakewell, the Italian brand’s autumn/winter 2019 Mary Janes feature pearl laden straps held in place by a crystal bow clasp. If Chung was a shoe, this could be a viable contender for the style that most embodies her character. The princessy pumps are also in line with the more outré looks she has been modelling, with the help of stylist Danielle Goldberg, on the fashion talent show she co-hosts with Queer Eye’s Tan France. From vintage Gianni Versace pleated metallic mini skirts to sky-blue Rosie Assoulin ball gowns, the Netflix small screen has given Chung the platform to wear fantastical pieces that her everyday life as creative director of her eponymous label perhaps does not.

Chung has often credited her signature uniform of navy jumpers, straight-leg jeans and flats to her ballet pump-clad predecessor, Jane Birkin. The last major red-carpet look she wore was also an ode to the chanteuse. Perusing pictures of her personal style muse while looking for inspiration for her Fashion Awards 2019 dress, Chung stumbled across a photograph of Birkin wearing a black backless gown circa the late ’70s. Her De Beauvoir-based design team made her a monochrome sequined dress that mirrored “the same alluring silhouette, but with a very starchy, classic collar and cuffs”. 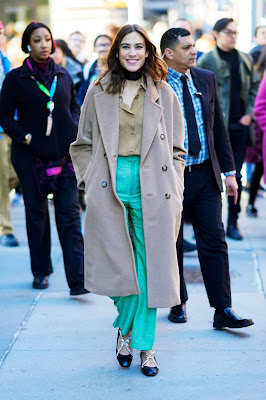 Chung told British Vogue at the time that she had felt the offbeat-yet-classic design was befitting of a night where “the room would be full of people wearing ‘moments’”. “That idea of a fashion community expressing themselves through clothes makes me want to retreat into my comfort zone/armour, which I suppose is a nod to both music and eras gone by,” she said.

Chung’s (borrowed) sparkly flats are her way of bringing her own pizzazz to a staple that fits neatly into the “classics” category. If Brigitte Bardot was responsible for pirouetting ballet pumps from dance studios to fashion boutiques - the former ballerina commissioned Repetto to make her a red pair for her breakthrough role as Juliette in 1956’s And God Created Woman; Birkin played her part in commercialising them, and Kate Moss took them into the Noughties, then Chung, too, has had a role in influencing our inclination towards functional flats that pop.

Posted by FASHIONmode News at 12:15 PM