Many of the guests in London for British Vogue’s Fashion & Film party were fresh from Hollywood, enjoying the latest stop on an awards season circuit that kicked off with the Golden Globes and will draw to a close with the Oscars this weekend. Lily Cole, meanwhile, was fresh from the slightly less sunny, and certainly less star-studded, Davos. This contrast – addressing the climate crisis at the World Economic Forum one day, joining Rihanna and Bradley Cooper in Annabel’s the next – is illustrative of the vastly different worlds Cole manages to straddle, having gone from catwalk wunderkind to Cambridge graduate to filmmaker, author and environmental activist.

Cole travelled to Switzerland (by train) to meet scientists and youth delegates at Arctic Basecamp, an expedition tent that has been set up on the outskirts of the forum for four years running now, in a bid to keep the climate emergency uppermost in the minds of the politicians and business leaders attending. The tent serves as the scientists’ workplace during the day, but also their accommodation overnight. “The realities of climate change will make us uncomfortable,” points out Cole, who says she’d been “quite keen” on the idea of camping herself ahead of the trip, but readily admits she didn’t envy the Basecamp team when she arrived in Switzerland to sub-zero overnight temperatures. The problem isn’t the cold though – quite the opposite. “The science is getting scarier,” says Cole, “because we’ve been largely ignoring what the scientists have been saying for decades.” She cites a landmark IPCC report that warned in 2018 we had just 12 years left in which to keep global warming to a maximum of 1.5C, in order to stave off climate catastrophe.

“That report moved the needle,” Cole goes on. “[Climate change] started to feel real. And coinciding with that... you have this really powerful protest movement.” She’s talking, of course, about the global wave of school strikes spearheaded by 17-year-old Greta Thunberg, who was also at Davos, where she accused the World Economic Forum of ignoring the demands of the climate movement in characteristically brusque fashion. “It really moved me,” says Cole of hearing Thunberg speak. “We’ve got a situation where we have, effectively, children trying to persuade the adults to listen to the scientists.” 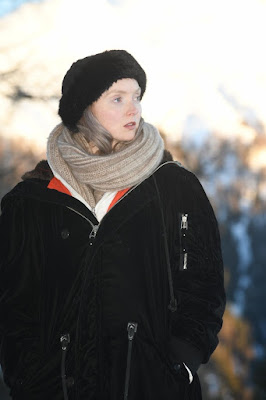 Cole is full of admiration for the schoolgirl activist and the youth delegates at Davos, but her own social conscience kicked in early, too. “In my teens I went through a period of trying to work out where to channel my energy,” is how she explains the path that has taken her from Chanel’s couture catwalk aged 18 to, last December, standing in solidarity with Extinction Rebellion hunger strikers outside Conservative Party Headquarters. In the intervening years, she’s established her own social enterprise, teamed up with the WWF to support wild rubber tappers in the Amazon, publicly declared her allegiance to the ethical bank Triodos, and acted as an early champion of sustainable fashion (she spent her days in Switzerland swaddled in a vintage Jean Paul Gaultier coat). Despite growing up a “proper urban kid” in London, Cole had realised that the environment is the point at which all of her passions converge – and focused her efforts accordingly. “Climate change is a problem that affects everything, every person,” she says. “It’s the rug underneath it all.”

Despite the urgent need for faster and far more drastic action to curb emissions, Cole says she was cheered by the impact Arctic Basecamp has had since founder Professor Gail Whiteman and her team first set up camp at Davos in 2017, determined to put evidence of global warming they’d witnessed first-hand in the Arctic in front of the people who needed to see it most. Climate change was something of a fringe topic when Cole first attended the forum some six years ago, she says, but in 2020 it was “high on the agenda across the board”. “These are Arctic scientists talking about their experiences of climate change on the ground,” she says. “That’s hard to argue with.”

“Climate optimism” is the stance Cole says she’s had to adopt for her own sanity, and the same one that informs the book she’s written, set to be published by Penguin this summer. At a time when newspaper headlines grow bleaker by the day, Who Cares Wins: Reasons For Optimism In Our Changing World is a clarion call: a reminder of the power of the individual to make a difference. “From our purchasing power to our political voice, we are all part of this ecosystem, no one person out there is going to fix it,” says Cole, quoting the zero waste chef Anne-Marie Bonneau: “We don’t need a handful of people doing zero waste perfectly, we need millions of people doing it imperfectly.”

Essentially, Cole wants to see us focus less on what we do wrong, and more on what we can do right. “There is so much rhetoric around perfectionism and calling people out,” says Cole. “I’m trying to travel a lot less, and I came here by train. But there are some things I have to do by plane, so I offset [the carbon emissions from the flight] when I do... I try to make my peace with it. I’m doing the best I can, but I’m okay with not being perfect.” Her best looks pretty impressive from here.

Posted by FASHIONmode News at 6:49 PM