Moncler Genius Adds Jonathan Anderson To Its Group Of Collaborators

The proof that the Moncler Genius project is really genius is the fact that the luxury outerwear company’s peers have started building guest designer initiatives of their own. High profile, low commitment arrangements are the golden ratio of modern collaborations.

Today, the company announces its 2020 Genius lineup. Jonathan Anderson has joined the designer roster, but more unexpected is the expansion of the project’s framework. Rimowa, the LVMH-owned luggage company, and Mate.bike, an electric bicycle startup out of Denmark, are Moncler’s first lifestyle brand recruits.

“Our slogan is ‘Genius - One House Different Voices,’” Remo Ruffini, the brand’s president, said over the phone. “That means we give the voice to our designers and the house is Moncler, but this year we want to give the voice also to our customers.” Ruffini kept the details of Rimowa’s contribution vague but it seems certain it’s “not just another trolley” he’s talking about. “I want to make something that’s in the hands of my customers and give the possibility to them to build content and to talk to people around them.” A puffer phone case? All will be revealed at the Moncler Genius’s open-to-the-public show in Milan on 19th February, but Ruffini is clearly putting the emphasis on surprise and innovation. 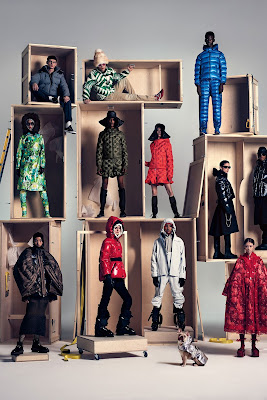 As for Anderson, the Irish designer joins a roster that includes Sergio Zambon and Veronica Leoni for Moncler 1952, Sandro Mandrino for Moncler Grenoble, Simone Rocha, Craig Green, Matthew Williams of 1017 ALYX 9SM, Fragment’s Hiroshi Fujiwara, and Richard Quinn. (After two rounds on the Genius team Pierpaolo Piccioli has moved on.) Ruffini said he chose Anderson for the third iteration of the project for his uniqueness. “He’s really different than the other players in the luxury industry,” he began. “I asked him to be simple, easy to understand, and to make a project for basically everyone, a unisex project. He’s able to talk with one jacket with men and with women, and my feeling is, with the young generation and more mature customers.”

Anderson, for his part, was enthusiastic about the prospect of working with Moncler from the word go. “I said yes straight away. I wanted to look back on things I’ve done and explore them in puffer. There’s been so many times I’ve wanted to use it, but it’s incredibly difficult to do properly. I came up with this idea of an inflated archive, where we would base some of the collection on shapes we had come up with and how they could be inflated and really try to do something very wardrobe based with a huge amount of desirability.”

Reflecting on the first two years of the Genius Project and its would-be copycats, Ruffini said, “For me it’s the new way to work. The question is to choose the right people. For sure, especially the young generation, they’re really keen to be part of Genius. I always say, let me think about it. We have a quite good mix for this year. Jonathan gives to us a good completion of the bouquet, let’s say.”

Posted by FASHIONmode News at 6:06 PM