Ahead Of NYFW, Virgil Abloh, Drake And Rosalía Lit Up The Nike Front Row

Last night (5th February) Nike unveiled its 2020 Olympics collection before a crowd of industry insiders and celebrities. British Vogue’s editor-in-chief, Edward Enninful, was joined by Virgil Abloh, Drake and Rosalía on the front row, to see the sporting giant showcase its latest innovations and designs.

The Rio Games don’t seem such a distant memory, but the four years since have brought a lot of changes – the most significant being increased awareness of the climate emergency, and the fashion industry finally turning the full beam of its attention on sustainability. Nike, for its part, vowed to make its kits for the Tokyo Games the most sustainable yet. 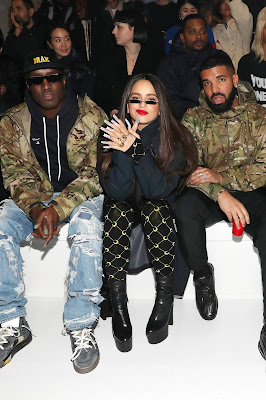 Drake wore Supreme New York trainers, an enormous heart-shaped diamond ring (he’s clearly getting in the mood ahead of Valentine’s Day), and a zip-up camo jacket that matched the one Abloh was wearing.

With them on the FROW were Travis Scott, gymnast Gabby Douglas and Nike CEO John Dahoe, at The Shed arts space in Chelsea. Rising star Rosalía was also in attendance; rocking a moon-print Marine Serre bodysuit, a padded gilet and black platform boots. She completed her monochrome look with a bold red lip, elongated acrylic nails and tiny sunglasses, proving the micro trend is here to stay. The Spanish singer-songwriter will likely show face at several of the shows this fashion month, and we can’t wait to she what (or who) else she wears.

Posted by FASHIONmode News at 6:41 PM