When South African model Xia Narain got home after closing the Burberry autumn/winter 2020 show, which she was booked to walk in as an exclusive, she “thanked her lucky stars”. She had met her model heroes Irina Shayk – “she kissed me on the cheek when I told her my mum loves her!” – Gigi Hadid and Kendall Jenner. And she was called a “goddess” by chief creative officer Riccardo Tisci, who dressed her in the heavy, armour-like silver dress dripping with crystal tassels. “As much as I wanted to walk for Burberry, I have received a lot of negative comments about the way I look in the past,” Xia tells British Vogue after her runway moment, which she calls the “biggest accomplishment of her life” and “better than falling in love”.

Xia was flown over to London from Cape Town, where she has just completed her psychology degree, by the agency PRM, “to see if she fitted in with the London Fashion Week market”. Now 24, she started her career a decade ago walking in shows in Durban, where she was born. Local agencies refused to sign her, she says, because “they told me I wasn’t dark enough, or light enough. They couldn’t place me.” South African agency Topco Models eventually “gave [her] a shot”, and Xia’s biggest gig before Burberry was a Coca Cola advert that was only aired in South America.

“It feels weird starting out and being the youngest girl on the runway,” says Xia. “Now, I’m the oldest.” She chose to skip the Burberry after-party and go back to her London base in Rotherhithe, so that she could reflect on what had happened – and call her parents. “My dad is such a huge fashion fan,” she smiles. “He was the one who first showed me pictures of Naomi Campbell on the runway. Now that I have contributed something positive towards representation in the industry, he is so proud. He’s a prison warden, so he rarely shows emotion, but he was blown away.” 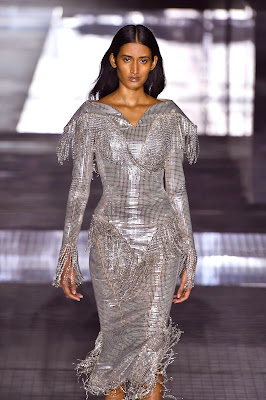 Xia’s late grandfather was also watching over as she walked the mirrored runway within Olympia National. She has a tattoo of his name on her left hand and touches it as a ritual before she steps out. Then, it’s her own mantras – “Breathe, don’t fall, you’ve got this, look fierce” – that she mentally repeats while walking. “I lose my shit backstage afterwards,” she laughs, “But beforehand, it’s always just me and my grandfather.”

The graduate – who will spend another month in London before she returns to Cape Town to study for her MA and then eventually a doctorate – has been losing her studious composure on tourist trips around the city’s landmarks. “I am obsessed with dinosaurs,” she gasps. “When I saw the T-Rex at the National History Museum, I almost cried.” The London Eye and West Ham football stadium are both on her to-do list. But Xia is happiest in the grocery stores, buying things to try that she doesn’t have access to at home.

London, she says, is “the best place in the world”, but she won’t settle here because she wants to follow in the footsteps of her father and use her degree to “travel the world helping criminals”. Xia likes to keep things in the family – and now, Burberry has invited her into its own. “Being noticed by such a big name has made me realise I can do whatever I want to,” she says. “It has blown my mind.”
Posted by FASHIONmode News at 7:40 AM