Richard Malone Is The 2020 Winner Of The International Woolmark Prize

The Irish designer Richard Malone was announced as the winner of the International Woolmark Prize (IWP), worth £105,000, at a ceremony hosted by supermodel Karen Elson in London on Monday night. The contest saw 10 finalists – including the Dutch creative directors of Nina Ricci, Rushemy Botter and Lisi Herrebrugh, and Samuel Ross of A-Cold-Wall* – present looks that were fully traceable. The US brand Bode was presented with the inaugural Karl Lagerfeld Award for Innovation, worth £53,000.

The designers had been tasked with using Merino wool in their submissions, and encouraged to consider transparency; focusing on supply chains and sustainability. Malone, who presented his autumn/winter 2020 collection at 180 The Strand just three days earlier, is known for his focus on responsible and ethical design.

Emily Bode, the menswear designer behind her eponymous brand Bode, prides herself on creating one-off pieces that encompass “traditional, female-centric methods of quilting, hand-drawing and crochet”. Bode’s contemporary take on heritage practices has already caught the eye of Harry Styles, who was seen sporting her blue plaid jacket in December. For her Woolmark submission, Bode looked to Boy Scout uniforms for inspiration; patching appliqué badges onto a suit and a sweater. “It was about looking at a lot of the historical ways of reuse and self-sufficiency, and preserving those narratives while also incorporating them into the collection,” she told British Vogue at the ceremony. 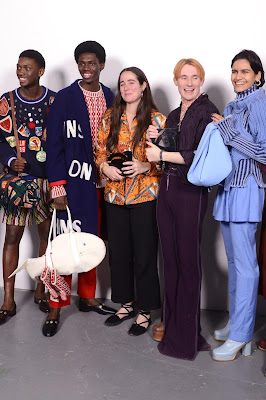 Carine Roitfeld, who presented the inaugural prize established in Karl Lagerfeld’s honour (the late designer himself became a Woolmark winner aged just 21), told Vogue: “I think tonight was super. The quality of the presentation, and the ability of these young people was great to see.

At the ceremony, host Elson emphasised that the industry has a responsibility to support the “future leaders” striving for a more sustainable future. The winners were chosen by a panel of leading industry experts that included British Vogue editor-in-chief Edward Enninful and Dior’s Kim Jones.

All products featured on the website are independently selected by our Editors. However, when you buy something through our retail links, we may earn an affiliate commission.

Posted by FASHIONmode News at 7:53 AM