The greatest showman as well as a visionary designer, Alexander McQueen amazed audiences with his fashion show theatrics. To mark the 10-year anniversary of his passing, Vogue revisits his most memorable moments on the catwalk. Alexander McQueen was a visionary. Over the course of his 18-year career, the designer’s presentations for both his eponymous label and Givenchy, where he served as creative director from 1996 to 2001, were the stuff of legend: 10 minutes of pure theatre that enthralled audiences with their audacity and conceptual brilliance.

The recipient of four British Designer of the Year awards, as well as a CBE, and now heralded as a genius, it’s easy to forget that McQueen’s creations were divisive from the offset. His 1992 graduate collection, entitled Jack the Ripper Stalks His Victims, included a coat printed with thorns and locks of McQueen’s own hair sewn into the garments. It set the tone for the shows that followed: Taxi Driver paid homage to Martin Scorsese’s troubled protagonist Travis Bickle; Highland Rape was a commentary on England’s violation of Scotland; and The Hunger showcased transparent bustiers filled with worms. For Dante in 1996, a skeleton was seated front row, while the 1997 show It’s a Jungle Out There saw a car catching fire, albeit accidentally. 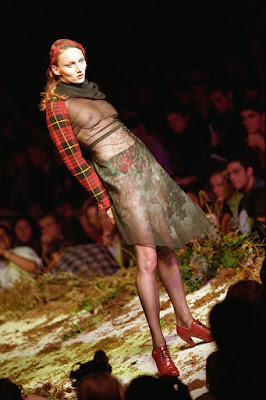 McQueen’s shock tactics weren’t always a hit with his sponsors. The designer’s spring/summer 1998 show, partly financed by American Express, was originally titled The Golden Shower before the company demanded the name be changed. McQueen conceded, calling it Untitled, but that didn’t stop him sending models down a runway made of water-filled tanks while rain poured from above and spotlights bathed them in a suggestive yellow glow.

For Joan later that year, his exploration of the elements moved from water to fire with a show that ended with a masked model being surrounded by a ring of fire. Meanwhile, 1999’s No. 13 was the collection that cemented McQueen’s reputation as the ultimate showman. It not only featured Paralympian Aimee Mullins wearing prosthetic legs carved from elm wood, but ended with two robots spray-painting a dress worn by supermodel Shalom Harlow. The latter went on to become one of the most memorable catwalk finales in fashion history.

Posted by FASHIONmode News at 10:45 AM