With concern about the coronavirus mounting, how to greet people at a fashion dinner? Handshake? Fist bump? Smile with your eyes? Well, it was kissing and hugging all around at the Élysée Palace on Monday night when French President Emmanuel Macron and his wife Brigitte summoned pretty much every designer in town to a lavish dinner to kick off Paris Fashion Week.

“We need to be together and respect each other and help each other because I feel we all live the same struggles,” he said. “For example, I was speaking with some designer friends now and the coronavirus is a real crisis even for fashion and we all are facing it, no matter which brands we are and how much money we have. It’s a fashion crisis, a human crisis and we are together in that crisis.” “I think there’s a lot more camaraderie than people give credit for,” agreed Waight Keller, who chatted with Ghesquière about a reception room at the palace decorated by Pierre Paulin in a groovy modernist style. 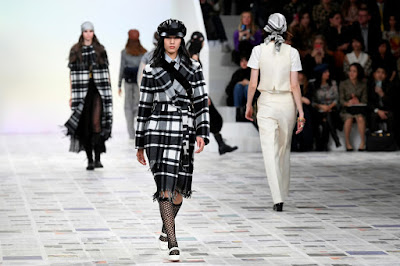 Waight Keller recently invited Marc Jacobs to appear in a Givenchy campaign, and she collaborated with Piccioli on an issue of A Magazine, prizing this glimpse at other designers’ working methods. For his part, Piccioli gave a thumbs up to the news that Miuccia Prada invited Raf Simons to be her co-creative director.

“I know what it means,” he said, alluding to more than two decades codesigning with Chiuri at Fendi and later Valentino. “I think it’s great when you arrive at a common point of view that comes from two identities.” Before dinner, Macron took to the mic to tout the dynamism of Paris, a magnet for creative people. “At least half of you come from outside France,” he said, glancing at the packed room with designers hailing from India, South Africa, Italy, Belgium, Morocco, Beirut and points beyond.

He encouraged them all to embrace “eco-friendly design” and to reduce fashion’s environmental footprint through innovation and creativity. Macron also paid special tribute to the “French phenomenon” seated at his elbow: Jean Paul Gaultier, who last month staged his last fashion show. He praised his ability to disrupt and the freedom with which he approached his metier, “what France does represent to the rest of the world.”

Posted by FASHIONmode News at 7:40 AM