Gucci will present its Cruise 2021 collection in San Francisco on 18th May, because of creative director Alessandro Michele’s affinity with the city’s deep activist roots. “A cultural melting pot and the setting for many historic moments that have shaped the world, San Francisco is a symbol for liberty, where antidotes to discrimination have been cultivated, sowing the seeds for freedom of self-expression for many,” read a statement from the Italian house released on 4th February.

Although the exact location is yet to be confirmed, the setting mirrors Michele’s counter-cultural brand vision. “Unveiling the collection in the city will reconnect him with his most personal raison d’être: a celebration and validation of self-expression, emancipation and ultimately, freedom,” Gucci continued. 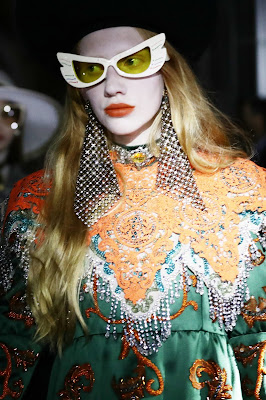 So what can we expect from the hyper-historicist’s holiday-focused fashion show come spring? After four seasons unveiling Gucci’s Resort lines in Europe – at the Capitoline Museums in Rome; the Promenade des Alyscamps in Arles, the Palatine Gallery at Palazzo Pitti in Florence; and the Cloisters of Westminster Abbey in London – Michele’s move Stateside suggests that the collection will be chock full of tropes associated with San Francisco’s rejection of racism, warfare and repression, and its proposition of alternative social norms.

From anti-Vietnam protests, to the Black Panthers’ moves to combat police brutality against the African-American community, the Summer of Love in 1967 will no doubt inspire Michele’s Gucci-verse. The communal, peace-making spirit of the some 100,000 people who converged in Haight-Ashbury wearing beatnik clothing will also chime with the theme of liberation sewn into the seams of the last Cruise collection. As well as social justice – whether related to same-sex relationships, healthcare, or the environment – will Michele touch on how San Francisco’s galvanised community contributed to the birth of Silicon Valley, too?

“Sometimes I feel like I’m choking,” Michele told British Vogue at the Cruise 2020 show. “Through fashion, I found freedom. It’s important to say things because dressing is about using your freedom of expression. Those who work in fashion must express their feelings. We have antennas and I fear they’ll either get broken, or get longer and longer and more sensitive, especially when freedom is compromised. Those who can must speak and do something.” Stay tuned for Gucci’s latest socio-political statement, and to see how “hippie” fashion will be presented through Michele’s lens, on 18th May.

Posted by FASHIONmode News at 12:17 PM