Three words to note from Copenhagen Fashion Week: Please Don’t Pet. The debut collaborative capsule collection from A$AP Nast and D33J took CIFF by storm, in part down to the energy between A$AP mob member Tariq Devega and Djavan Santos, the DJ and producer behind D33J and his brand Pangea. The duo won over the Scandi set at the fair curated by Machine-A’s Stavros Karelis with their beats and bespoke silk-screened tees, but foremost a concise clothing edit unlike anything else on offer at Denmark’s autumn/winter 2020 shows.

“People buy into whatever is real - PDP is that,” Nast tells British Vogue in the caged periphery of the pop-up. “The next thing we drop as a duo might be a song, rather than clothing. We just like to express ourselves as artists, we’re less concerned with the medium.” This fluid approach to style, art and music is part of the ongoing conversation around creativity that the A$AP Mob has practiced since Harlem rappers A$AP Yams, A$AP Bari, and A$AP Illz founded the movement in 2006. A$AP Rocky and A$AP Ferg are perhaps now the collective’s biggest ambassadors, but Nast is known as “the dresser” in the group, vouches D33J: “His vision and commitment to style is what made this collab happen.”

The PDP collection began with a supply of vintage cargo pants that Nast and D33J, who met through mutual friends, came across in LA. “Resources are becoming scarcer, so we felt it was important to utilise what’s already out there when creating new work,” says D33J of upcycling the camo trousers in California, where the rest of the line is made. “From there, we stuck with the military vibe and brought an interactive video installation of kids’ security-cam footage, created graphics of canine units and incorporated industrial design aspects into the textiles.” Dog-tag necklaces and heavy cotton T-shirts printed with the graphic PDP logo make up the rest of the product edit, which the duo is adamant is not merch.

“I’d call it a fashion collection,” says Nast, before D33J jumps in: “Fashion is a broad word these days, we’re just expressing ourselves and doing our own thing.” Authenticity, moreover, is the word that comes up again and again during our conversation. “If you’re being true to yourself then people can sense that,” continues D33J. “We’re less concerned about what’s popping, we just want to make the best work we can.” 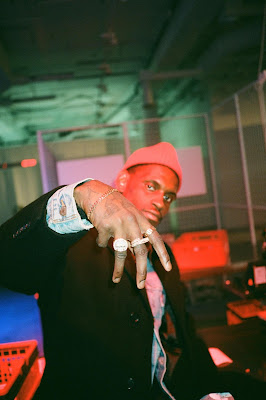 Accordingly, the pair designs for themselves. “Anything we make has to reflect our egos,” says D33J. “It has to be something we want to wear.” Nast - who has a handful of brand collaborations under his belt, including an ongoing relationship with Converse, adds: “I love clothing. I do my own thing and if people consider what I do fashion, then I respect that. This collection is for people just like us: people who care about style. Sometimes I don’t even like people that partake in fashion…”

Being part of a collective has given Nast a protective force sphere within which to experiment. (D33J, too, is part of record label and creative clique Wedidit, and has worked with Tory Lanez and Lil Yachty to acclaim.) “You can lose by yourself, but when there’s two of you it’s harder to fail,” Nast explains. “We’re brothers who are there for each other; whether we come from the same blood or not.” Being “a shoulder to lean on” goes hand in hand with the brotherly rivalry and bravado of the Mob. “We’re a strong collective simply because we look at each other as competition,” Nast continues. “A$AP is a lifestyle and people want to buy into that.”

Having “a storyline or a culture for people to understand a brand within” has been part and parcel of PDP’s success. But what’s next? “We’re following the organic flow of our creativity, so we’ll see where it takes us and go from there,” muses D33J, before adding that a pop-up within Machine-A’s London store will anchor them in Soho momentarily in February. “People believe I have a vision, but, to be honest, I really don’t,” says Nast. “I just do what feels right and it works for me. I’m not too concerned, but at the same time I care. Like D33J says, I’m a dresser!”

Catch the self-professed “perfect individual” (Nast) and the producer who understands how to artfully tap into our image-based culture (D33J) in London later this month. Or follow them at @nst2_lab and @h3yd33j to find out how to purchase PDP elsewhere.

Posted by FASHIONmode News at 4:34 PM